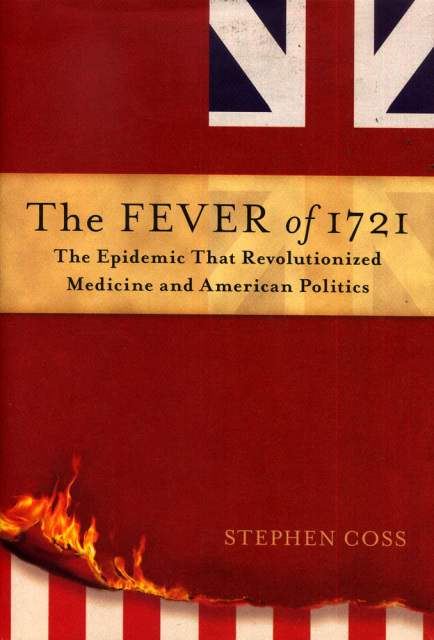 The Fever of 1721: The Epidemic that Revolutionized Medicine and American Politics by Stephen Coss

The Fever of 1721: The Epidemic that Revolutionized Medicine and American Politics by Stephen Coss

This is the story of a fateful year that prefigured the events of 1776. Stephen Coss brings to life an amazing cast of characters in a year that changed the course of medical history, American journalism, and colonial revolution. We meet Cotton Mather, the great Puritan preacher; Zabdiel Boylston, a doctor whose family name is on one of Boston's grand streets; James Franklin and his younger brother Benjamin; and Elisha Cooke, who became the political mentor, model, and lodestar to Samuel Adams and the patriots. During the worst smallpox epidemic in Boston history, Mather convinced Dr. Boylston to try a radical procedure. Putlic outrage forced Boylston into hiding, and Mather's house was firebombed. A political fever also raged. Elisha Cooke was challenging the Crown for control of the colony. A bold young printer, James Franklin, launched America's first independent newspaper. Benjamin Franklin, a teenager, learned his trade in James's shop. He developed the skills and convictions that would distinguish him as a writer, diplomat, scientist, and revolutionary. The Boston smallpox epidemic of 1721 was the catalyst for the invention of American journalism, the coming-of-age of Benjamin Franklin, and the beginning of American independence. It was also a turning point in the eradication of history's deadliest disease. THE FEVER OF 1721 brings these remarkable stories together for the first time.