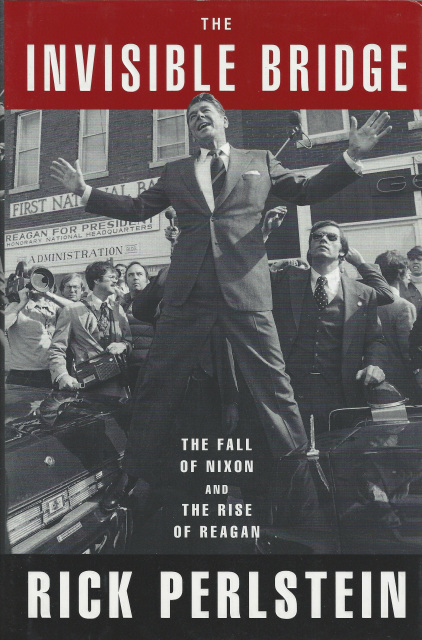 The Invisible Bridge: The Fall of Nixon and the Rise of Reagan by Rick Perlstein

The Invisible Bridge: The Fall of Nixon and the Rise of Reagan by Rick Perlstein

THE INVISIBLE BRIDGE is the story of America on the verge of a nervous breakdown -- an account of the unprecedented loss of national confidence that took place in the United States between 1973 and 1976, the years when President Nixon resigned in disgrace and Governor Ronald Reagan began his long march to the White House.

It is a book that takes you beyond the day's headlines to the reactions of ordinary Americans to a society that felt like it was falling apart before our eyes: White House officials describing on live TV the crimes the committed for their president. The price of meat doubling and the price of a barrel of crude oil quadrupling. An heiress kidnapped for ransom -- who then declared she had joined the murderous gang that had kidnapped her, saying, "Death to the fascist insect that preys upon the life of the people." Fundamentalists bombing a school board building in West Virginia over school textbooks and Catholic parents fighting running battles with police in South Boston over school desegregation. The fall of Saigon, rendering moot the sacrifices of some 58,000 American lives. The near-bankruptcy of New York City. Eighty-nine terrorist bombings in 1975. Amid it all, Americans began to think about their nation in a new way -- as merely one more nation among nations, no more providential than any other.

Ronald Reagan never got the message. So when he announced his intention to challenge President Gerald Ford for the Republican nomination in America's bicentennial year, pundits dismissed him. But just as in popular culture, where nostalgia (Happy Days, Harry Truman, "The Boogie-Woogie Bugle Boy of Company B) was replacing a former taste for stories of paranoia and apocalypse, it started to look like the smiling politician from Hollywood just might win. Rick Perlstein's metaphor of the "invisible bridge" speaks to Ronald Reagan's uncanny ability to simultaneously reassure Americans and absolve them, to dull their faculties of critical citizenship and inspire their hope for America's prospects -- an accomplishment that frames our debates about what it means to be an American patriot to this day.