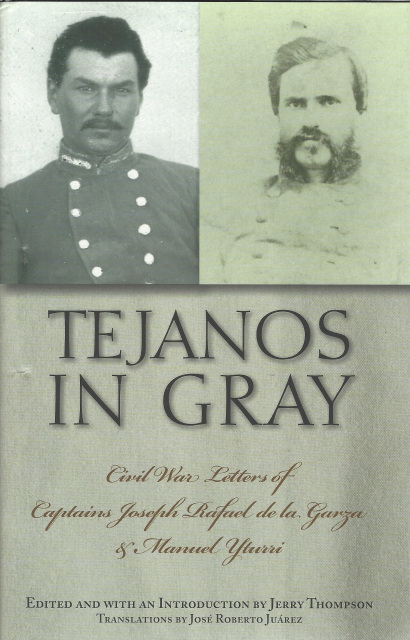 The Civil War is often conceived in simplistic, black and white terms: whites from the North and South fighting over states' rights, usually centered on the issue of black slavery. But, as Jerry Thompson shows in TEJANOS IN GRAY, motivations for allegiance to the South were often more complex than traditional interpretations have indicated.

Gathered for the first time in this book the forty-one letters and letter fragments written by two Mexican Texans, Captains Manuel Yturri and Joseph Rafael de la Garza, reveal the intricate and intertwined relationships that characterized the lives of Texan citizens of Mexican descent in the years leading up to and including the Civil War. The experiences and impressions reflected in the letters of these two young members of the Tejano elite from San Antonio, related by marriage, provide fascinating glimpses of a Texas that had displaced many Mexican-descent families after the Revolution, yet could still inspire their loyalty to the Confederate flag. De la Garza, in fact, later lost his life fighting for the Southern cause.

The letters, translated by Jose Roberto Juarez and with meticulous annotation and commentary by Thompson, deepen and provide nuance to our understanding of the Civil War and its combatants, especially with regard to the Tejano experience.

Historians, students, and general readers interested in the Civil War will appreciate TEJANOS IN GRAY for its substantial contribution to borderlands studies, military history, and the often-overlooked interplay of region, ethnicity, and class in the Texas of the mid-nineteenth century.