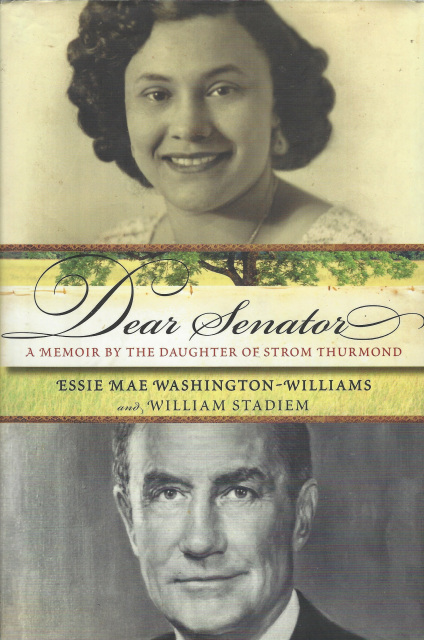 DEAR SENATOR: A MEMOIR BY THE DAUGHTER OF STROM THURMOND by Essie Mae Washington-Williams and William Stadiem

Dear Senator: A Memoir by the Daughter of Strom Thurmond by Essie Mae Washington-Williams and William Stadiem

In DEAR SENATOR, Essie Mae Washington-Williams -- daughter of the late Senator Strom Thurmond -- breaks her lifelong silence and tells the story of her life. Hers is a story seven decades in the making, yet one whose unique historical importance has only recently been revealed. Until the age of sixteen, Washington-Williams assumed that the aunt and uncle who raised her in Pennsylvania were her parents. The revelation of her true parents' identities was a shock that changed the course of her life. Her father, the longtime senator from South Carolina, was once the nation's leading voice for racial segregation; he ran for president on a segregationist ticket in 1948 and once mounted a twenty-four-hour filibuster against the Civil Rights Act of 1957 -- in the name of saving the South from "mongrelization." Her mother was Carrie Butler, a black teenager who worked as a maid on the Thurmond family's South Carolina plantation. Set against the explosively changing times of the civil rights movement, Washington-Williams's memoir reveals a brave young woman who struggled with the discrepancy between the father she knew -- one who was financially generous, supportive of her education, even affectionate -- and the old Southern politician, railing against greater racial equality, who refused to acknowledge their relationship in public. She describes what it felt like to face overt racism, especially in the slow-to-change South, despite the fact that her father was the most powerful politician in Dixie. From her richly told narrative emerges a nuanced, fascinating portrait of a father who counseled his daughter about her goals, and supported her in reaching them -- but who was ultimately unwilling to break with the values of his Dixiecrat constituents. With elegance, candor, and spirit, Essie Mae Washington-Williams gives us a chapter of American history as it has never been written before -- told in a voice that will be heard an cherished by generations.