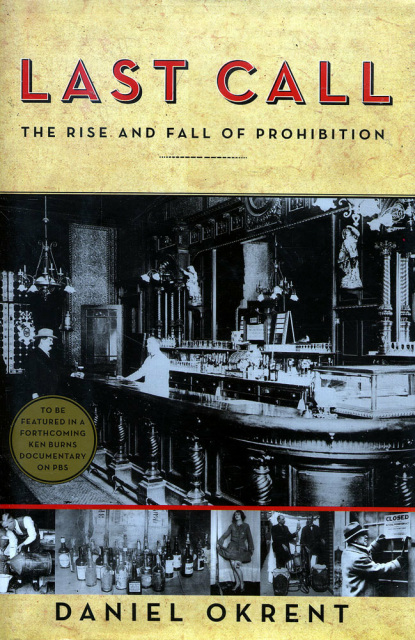 LAST CALL: THE RISE AND FALL OF PROHIBITION by Daniel Okrent

From its start, America has been awash in drink. The sailing vessel that brought John Winthrop to the shores of the New World in 1630 carried more beer than water. By the 1820s, liquor flowed so plentifully it was cheaper than tea. That Americans would ever agree to relinquish their booze was as improbable as it was astonishing.

Yet we did, and LAST CALL i sDaniel Okrent's dazzling explanation of why we did it, what life under Prohibition was like, and how such an unprecedented degree of government interference in the private lives of Americans changed the country forever.

Writing with both wit and historical acuity, Okrent reveals how Prohibition marked a confluence of diverse forces: the growing political power of the women's suffrage movement, which allied itself with the anti-liquor campaign; the fear of small-town, native-stock Protestants that they were losing control of their country to the immigrants of the large cities; the anti-German sentiment stoked by World War I; and a variety of other unlikely factors, ranging from the rise of the automobile to the advent of the income tax.

Through it all, Americans kept drinking, going to remarkably creative lengths to smuggle, sell, conceal, and convivially (and sometimes fatally) imbibe their favorite intoxicants. LAST CALL is peopled with vivid characters of an astonishing variety: Susan B. Anthony and Billy Sunday, William Jennings Bryan and bootlegger Sam Bronfman, Pierre S. duPont and H.L. Mencken, Meyer Lansky and the incredible -- if long-forgotten -- federal official Mabel Walker Willebrandt, who throughout the twenties was the most powerful woman in the country. (perhaps most surprising of all is Okrent's account of Joseph P. Kennedy's legendary, and long-misunderstood, role in the liquor business.)

It's a book rich with stories from nearly all parts of the country. Okrent's narrative runs through smoky Manhattan speakeasies, where relations between the sexes were changed forever; California vineyards busily producing "sacramental" wine; New England fishing communities that gave up fishing for the more lucrative rum-running business; and in Washington, the halls of Congress itself, where politicians who had voted for Prohibition drank openly and without apology.

LAST CALL is capacious, meticulous, and thrillingly told. It stands as the most complete history of Prohibition ever written.

THIS IS A BRAND NEW BOOK. THERE IS A BLACK "CLOSEOUT/REMAINDER" MARK ON THE TOP PAGE EDGES. THE DUSTWRAPPER IS ENCLOSED IN A MYLAR COVER TO HELP PREVENT DAMAGE.