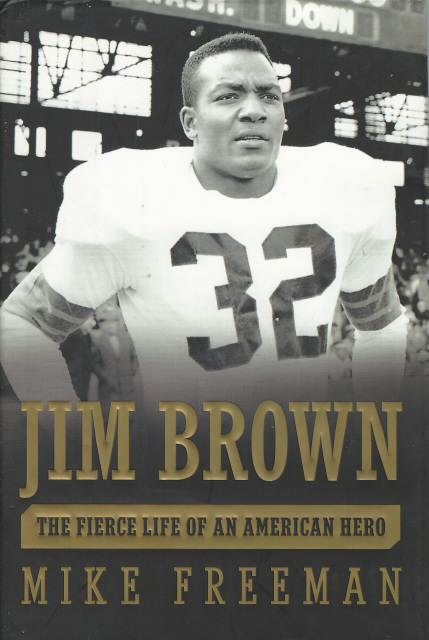 Jim Brown: The Fierce Life of an American Hero by Mike Freeman

Jim Brown: The Fierce Life of an American Hero by Mike Freeman

Jim Brown was an astonishing physical specimen with tremendous skills and intelligence. An athlete who played a number of sports at Syracuse University, he ultimately discovered that it was the violence of football that appealed to him most. The idea of physically dominating other men, surviving ferocious battles on the field against opponents who would just as soon call him a nigger as try to gouge out his eyes fueled an astonishing, record-making NFL career that led to the Hall of Fame. He battled his defenses, sometimes his teammates, and often the Cleveland Browns' legendary head coach Paul Brown.

But Jim Brown had ambitions greater than football. He used his athletic brilliance to launch a movie career, becoming Hollywood's first black action hero, culminating in a scandalous love scene with America's sweetheart Raquel Welch. He leveraged his popularity into helping the NFL's black players and becoming a civil rights activist. Never shy about expressing his opinions, Brown would become the subject of FBI investigations and surveillance throughout parts of his life.

Then there were the women. The patient wife who was essentially a single mother and who endured public humiliation. The girlfriends he ran through and the scandalous accusations of violence made by some of them.

A complex and fascinating story, JIM BROWN is a towering biography of a living legend.