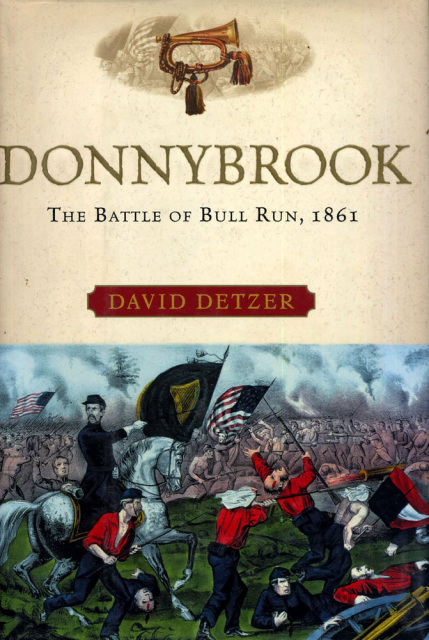 Donnybrook: The Battle of Bull Run, 1861 by David Detzer

Donnybrook: The Battle of Bull Run, 1861 by David Detzer

In April 1861, Confederate artillery blasted Fort Sumter into surrender. Within weeks, the Confederacy established its capital at Richmond. On May 24, Lincoln ordered troops across the Potomac into Virginia, only a few miles from the Confederate military base near the hamlet of Manassas. A great battle was inevitable; whether this would end the war as many expected, was the only question. On July 21, near a stream called Bull Run, the two forces fought from early morning until after dark in the first great battle of the Civil War. America would never be quite the same.

DONNYBROOK is the first major history of Bull Run to detail the battle from its origins through its aftermath. Not since William C. Davis's study of the battle, written decades ago, has a historian approached this linchpin event with such force, insight, and fresh energy.

The first Battle of Bull Run introduced citizens of this country to the draft, the effects of heavy artillery, and the emotional violence of fighting your neighbor for an uncertain cause. It tested the character of men who would later dominate the historical record: Stonewall Jackson, James Longstreet, Irvin McDowell, and William T. Sherman. In the wake of the battle, the Union was forced to reconsider its strength and searched within its ranks for a scapegoat. David Detzer is the first historian to analyze the resulting JOint Committee on the Conduct of the Present War and thus the first to exonerate General Robert Patterson.

Using copious and remarkably detailed primary source material -- including the recollections of hundreds of average soldiers -- David Detzer has created an epic account of a defining moment in American history.

THIS IS A BRAND NEW BOOK. THE DUST WRAPPER IS ALSO BRAND NEW AND IS ENCLOSED IN A MYLAR COVER TO HELP PREVENT DAMAGE.