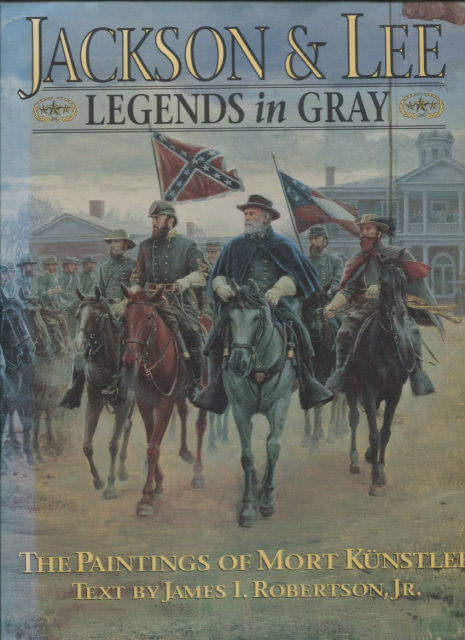 Jackson & Lee: Legends in Gray, The Paintings of Mort Kunstler, Text by James I. Robertson, Jr.

Jackson & Lee: Legends in Gray, The Paintings of Mort Kunstler, Text by James I. Robertson, Jr.

"In the pantheon of American soldiers," says James Robertson, "none stands taller than Confederate generals Thomas J. 'Stonewall' Jackson and Robert E. Lee." These two remarkable leaders epitomized the traits that are so admirable in people of character: duty, valor, and honor. "People who say that Lee and Jackson did not really exist make that statement because no one like them exists now," continues Robertson. Jackson & Lee: Legends in Gray is a stunning visual portrait of the two generals by the premier historical artist of our time and a compelling verbal portrait by one of America's leading Civil War historians.

Generals Jackson and Lee were both Virginians, both West Pointers, both Mexican War heroes, and both were Christian men who said that their faith governed their every action. Robertson points out that "they fought for the Southern Confederacy because in the nineteenth-century the state that had nurtured them was their motherland. Working in concert for only a year, they shaped war as no two commanders ever have."

Jackson was an instructor at Virginia Military Institute, and Lee was superintendent at West Point before the Civil War. The two came together in June 1862 at the Seven Days battles, and Jackson spent the rest of his career under Lee's direct command. Known as Lee's best corps commander, Jackson was accidentally and fatally wounded in May 1863 by his own men after the first day's fighting at Chancellorsville. Lee boldly planned and oversaw two invasions of the North and frustrated every Union commander appointed by Lincoln until Grant slowly forced him into the siege at Petersburg and the withdrawal to Appomattox. These men were truly "legends in gray."

In this book, the story of Stonewall Jackson and Robert E. Lee is portrayed with reverential attention to accuracy and detail. The 79 spectacular works of art in this collection include 44 never before seen in any book. The artist's concern for authenticity and his respect for his subjects are obvious."

The text by James I. Robertson, Jr. is both a biography of the two generals and the story of their contributions to the Southern cause. The foremost authority on Jackson today, Robertson's writing generates an easy rapport between readers thand these two outstanding legends of the American Civil War -- The Marble Man and Old Jack.