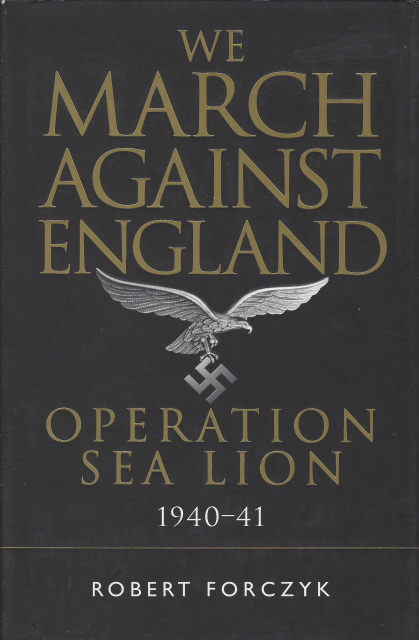 WE MARCH AGAINST ENGLAND: OPERATION SEA LION, 1940-41 by Robert Forczyk

We March Against England: Operation Sea Lion, 1940-41 by Robert Forczyk

The prevailing historical narrative of Operation Sea Lion endorsed by Churchill and official histories after the war leans heavily on the Luftwaffe's failure to gain aerial supremacy over the RAF during the Battle of Britain -- the two-month struggle for control of the skies that culminated in the climactic battles in September 1940. However, attributing the cancellation of the invasion, and by extension the end of the threat to Britain's shores, to this alone is a dangerous oversimplification.

In place of this convenient story of RAF heroism, Robert Forczyk presents a detailed, holistic analysis of the major German campaigns intended to bring Britain to its knees, from sustained attacks against Britain's maritime commerce to the terror-bombing of civilians -- while the German army and navy raced to achieve the amphibious capabilities necessary for invasion.

Based on extensive new archival research, We March Against England offers a balanced and comprehensive account of the capabilities and preparations of both sides, from analysis of inter-arms cooperation to the effectiveness of intelligence-gathering, and lays bare the true inadequacies of British defensive preparations as the country stood on the brink of invasion.