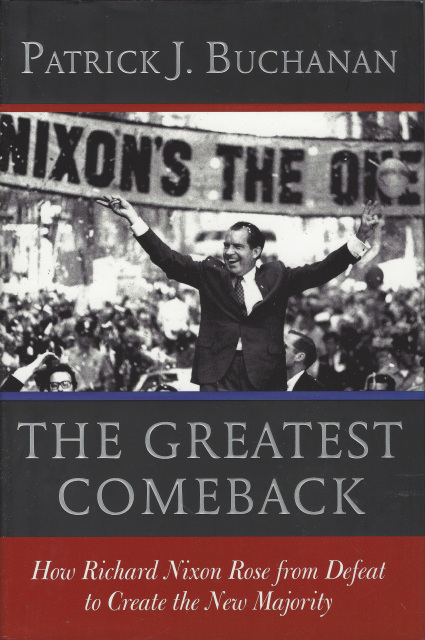 The Greatest Comeback: How Richard Nixon Rose from Defeat to Create the New Majority by Patrick J. Buchanan

The Greatest Comeback: How Richard Nixon Rose from Defeat to Create the New Majority by Patrick J. Buchanan

After suffering stinging defeats in the 1960 presidential election against John F. Kennedy and in the 1962 California gubernatorial election, Nixon's career was declared dead by Washington press and politicians alike. Yet on January 20, 1969, just six years after he had said his political life was over, Nixon would stand taking the oath of office as thirty-seventh president of the United States. How did Richard Nixon resurrect a ruined career and reunite a shattered and fractured Republican party to capture the White House?

In The Greatest Comeback, Patrick J. Buchanan -- who, beginning in January 1966, served as one of two staff members to Nixon and would become a senior adviser in the White House after 1968 -- gives a firsthand account of those crucial years in which Nixon reversed his political fortunes during a decade marked by civil rights protests; social revolution; the Vietnam War; the assassinations of JFK, RFK, and Martin Luther King; urban riots; campus anarchy; and the rise of the New Left. Using more than a thousand of his own personal memos to Nixon, marked with Nixon's scribbled replies, Buchanan provides an insider's view as Nixon gathers the warring factions of the Republican Party -- from the conservative base of Barry Goldwater to the liberal wing of Nelson Rockefeller and George Romney, to the New Right legions of an ascendant Ronald Reagan -- into the victorious coalition that won him the White House. How Richard Nixon united the party behind him may offer insights into how the Republican Party today can bring together its warring factions.

The Greatest Comeback is an intimate portrayal of the thirty-seventh president and a fascinating fly-on-the-wall account of one of the most remarkable American political stories of the twentieth century.