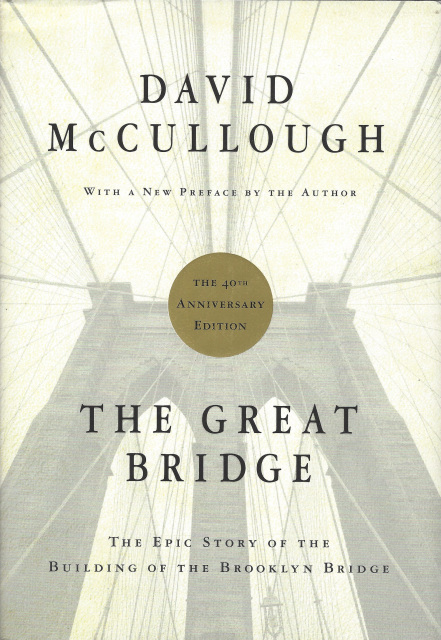 The Great Bridge: The Epic Story of the Building of the Brooklyn Bridge by David McCullough

The Great Bridge: The Epic Story of the Building of the Brooklyn Bridge by David McCullough

This monumental book tells the enthralling story of one of the greatest accomplishments in our nation's history, the building of what was then the longest suspension bridge in the world. The Brooklyn Bridge rose out of the expansive era following the Civil War, when Americans believed all things were possible.

So daring a concept as spanning the East River to join two great cities required vision and dedication of the kind that went into Building Europe's great cathedrals. During fourteen years of construction the odds against success seemed overwhelming. Thousands of people were put to work. Bodies were crushed and broken, lives lost, notorious political empires fell, and surges of public doubt constantly threatened the project. But the story of the building of the Brooklyn Bridge is not just the saga of an engineering miracle, it is a sweeping narrative of the social climate of the time, replete with heroes and rascals who helped either to construct or to exploit the great enterprise.

The Great Bridge is also the story of a remarkable family, the Roeblings, who conceived and executed the audacious engineering plan at great personal cost. Without John Roebling's vision, his son Washington's skill and courage, and Washington's wife Emily's dedication, the bridge we know and cherish would never have been built.

Like the engineering marvel it describes, The Great Bridge, republished on the fortieth anniversary of its initial publication, has stood the test of time.