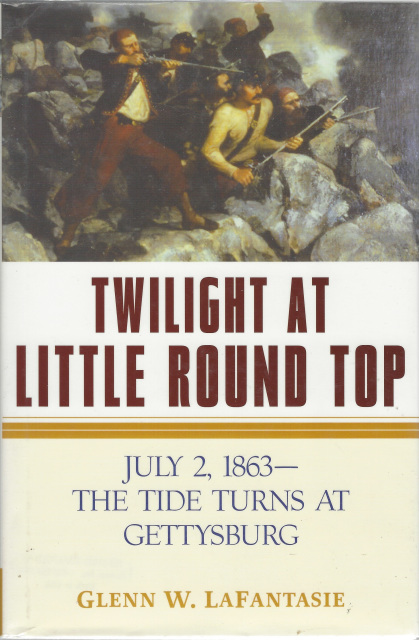 Twilight at Little Round Top: July 2, 1863 -- The Tide Turns at Gettysburg by Glenn W. LaFantasie

Twilight at Little Round Top: July 2, 1863 -- The Tide Turns at Gettysburg by Glenn W. LaFantasie

On every battlefield, decisive ground can often determine which army will win and which will lose. In the Civil War, one of those decisive places was Little Round Top. In the late afternoon of July 2, 1863, thousands of men from the Confederacy's Army of Northern Virginia and the Union's Army of the Potomac struggled over this small parcel of terrain, many of them giving their lives in a heroic effort to capture or defend the hill's rocky slopes and summit. Now, acclaimed author Glenn LaFantasie sheds new light on this legendary battle by telling the story as it really happened, through the eyes of the courageous men who fought here.

Written by one of the most respected historians of the Civil War period, Twilight at Little Round Top uses the celebrated "face of battle" technique to paint a vivid portrait of the second day's fight at Gettysburg. Told through the experiences of both high-ranking officers and low-ranking privates, LaFantasie's meticulously researched book is based on newly discovered documents as well as other rare firsthand sources -- some of which were mined for the first time from the Oates Family Papers and other private collections -- to reconstruct this decisive battle with dramatic intensity.

Twilight at Little Round Top looks beyond the legendary exploits and heroic tales of Joshua Lawrence Chamberlain -- who has become known as the savior of Little Round Top -- to offer piercing portraits of the other individuals who played a much more pivotal role on the hill, including young Porter Farley from Rochester, New York, who was eager to emancipate America's slaves by putting his life on the line in battle; Private Billy Jordan, whose family plantation in Alabama depended on slavery; surly and bearish Lieutenant General James Longstreet, blamed for the defeat at Gettysburg by generations of Southerners; and the Union's Colonel Paddy O'Rorke, whose brave and cool performance on the battlefield belied a gentle and tender heart hidden beneath his Irish mettle.

Brimming with memorable stories of quick wits and formidable courage, Twilight at Little Round Top recounts one day in a brutally devastating war, where grim-faced soldiers gritted their teeth, braved thunder and flames, and followed their officrs' commands as much as human endurance allowed for the sake of their fluttering flags.