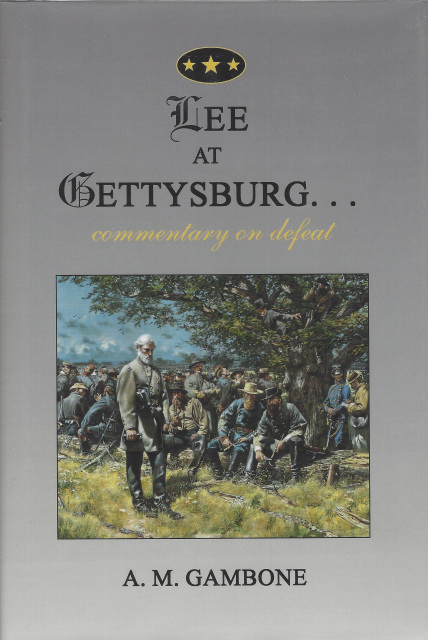 Lee at Gettysburg. . . Commentary on Defeat by A.M. Gambone

Lee at Gettysburg. . . Commentary on Defeat by A.M. Gambone

For many in America, the very name Robert E. Lee conjures up impressive visions of leadership, greatness, military acumen, and decisiveness that have all been blended with his gentle, patrician personality. Of course, there are other views completely opposite of such laudatory comments, but most of the fanciful conceptions emerge from decades of exaggerated Lee tales that have been thrust upon the reading public. A public that has been content to have their conclusions drawn by someone else! However, none of the imagery can change the fact that General Lee was a God-fearing individual, devoted father, faithful husband, dedicated soldier, and committed educator. In short, a good man. But, while these noble traits were intrinsic values for him, Lee's military command legacy is beginning to be more objectively re-evaluated outside the bounds called "Lee bashing." Even early results of this scrutiny confirm that the prevailing view of Lee is mainly a product of his idolaters, not an accurate reflection of the man.

Nowhere in the historic life of General Lee does the challenge to his leadership ability come under greater question than at the battle of Gettysburg. There, during the first three days of July 1863, Lee's proud, gray-clad Army of Northern Virginia clashed with the bluecoats of General George Gordon Meade's Army of the Potomac. After a resounding victory on the first, Lee's fortunes (and those of the Confederacy) took a sharp down-turn that created significant difficulties on the second and a disastrous defeat on the third. During the final moments of the battle, while self-positioned near the current Virginia Monument at Gettysburg, Lee sadly watched as his broken ranks came tumbling back from their valiant assault called "Pickett's Charge." With the stature and grandeur inherent in a true gentlemanly warrior, Lee was heard to lament in a pitiful voice:" ...all this has been my fault..." A stance he never altered!

Ever since those unsuccessful and fateful Pennsylvania moments, the American public has been taught that the causes of the Confederate setback sprang from a variety of reasons created mainly by Generals J.E.B. Stuart, Richard S. Ewell, and James Longstreet. According to his image-makers, Lee himself was never a contributor to that ignominious disaster. The lieutenants charged with that failure did so by disobeying orders; failing to respond promptly to Lee's decisions; losing their confidence; and/or sulking and pouting like an obstreperous child. Based on such claimes, the natural question then must be: Is it possible that these subordinate commanders, so dependable, gallant, and intrepid in the past, could suddenly, and in unison, fall prey to the god of incompetence? The answer(s) to this complex question represent(s) the primary purpose of this work.

Within these brief pages, the focus is: Lee at Gettysburg -- as the man he probably was -- not the idol created by others for personal gain. The design is not the Lee-denigration that has become all too popular, but instead, a blunt critique of the central factors that General Lee, and other participants and historians, have attempted to tell us. If there is one group that should accept all the criticism herein, it is the Lee image-makers of whatever period. They have turned this soldierly Virginia gentleman into a deific martial symbol of unerring mind and righteousness. If we step back and view Lee objectively, it becomes very clear that he was not the military genius so commonly claimed and his concept of honor and personal worth made him keenly aware of that shortfall. Despite his own candor and appreciation of his limitations, Lee's portrait was, nonetheless, crafted by some of his subordinates and writers who sadly wove their seraphic views with tenets of the Lost Cause. While no one volume can ever hope to completely unravel such a complex creation as Lee's image, this work, along with a few others, at least begins the difficult process and sets the tenor for the proper assessment of one of American history's most misrepresented sons.