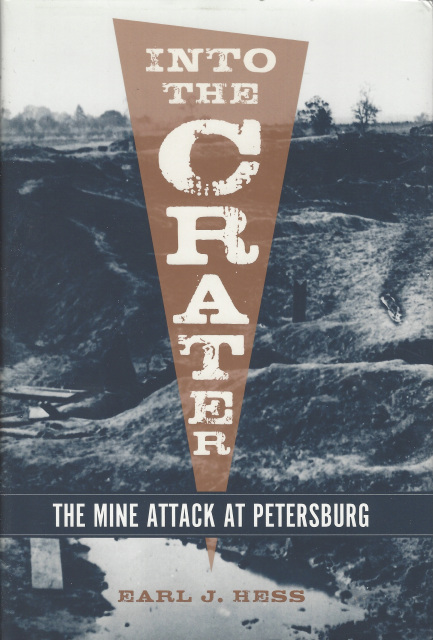 Into the Crater: The Mine Attack at Petersburg by Earl J. Hess

Into the Crater: The Mine Attack at Petersburg by Earl J. Hess

The Battle of the Crater on July 30, 1864, was the defining event in the 292-day campaign around Petersburg, Virginia, during the Civil War and one of the most famous engagements in American military history. Although the bloody combat of that "horrid pit" has recently been revisited as the centerpiece of the novel and film versions of Charles Frazier's Cold Mountain, the battle has yet to receive a definitive historical study. Distinguished Civil War historian Earl J. Hess fills that gap in the literature with Into the Crater, a comprehensive examination of the battle, its tragic outcome, and the myriad personalities involved on both sides.

The Crater was central in Ulysses S. Grant's third offensive at Petersburg and required the digging of a five-hundred-foot mine shaft under enemy lines and detonating four tons of gunpowder to destroy a Confederate battery emplacement. The resulting infantry attack through the breach in Robert E. Lee's line failed terribly, costing Grant nearly four thousand troops, among them many black soldiers fighting in their first battle. The outnumbered defenders of the breach saved Confederate Petersburg and inspired their comrades with renewed hope in the lengthening campaign to possess this important rail center.

In this narrative account of the Crater and its aftermath, Hess identifies the most reliable evidence to be found in hundreds of published and unpublished eyewitness accounts, official reports, and historic photographs. Archaeological studies and field research on the ground itself, now preserved within the Petersburg National Battlefield, complement the archival and published sources. Hess re-creates the battle in lively prose saturated with the sights and sounds of combat at the Crater in moment-by-moment descriptions that bring modern readers into the chaos of close range combat. Hess discusses field fortifications as well as the leadership of Union generals Grant, George Meade, and Ambrose Burnside, and of Confederate generals Lee, P.G.T. Beauregard, and A.P. Hill. He also chronicles the atrocities committed against captured black soldiers, both in the heat of battle and afterward, and the efforts of some Confederate officers to halt this vicious conduct.

The climactic explosion of July 30, 1864, which swallowed fifteen hundred Confederate troops, and the failure of the subsequent Union assault remain monumental moments in the complex history of Civil War combat. With fresh insights, adroit research in all manner of sources, and previously unpublished photographs and field maps, Hess takes readers into the Crater once more so that we might better understand the magnitude of this historical event, which Grant deemed "the saddest affair I have witnessed in the war."