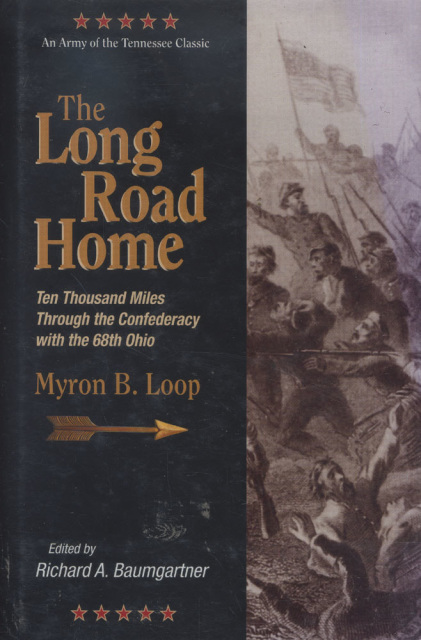 The Long Road Home: Ten Thousand Miles Through the Confederacy with the 68th Ohio by Myron B. Loop, Edited by Richard A. Baumgartner

The Long Road Home: Ten Thousand Miles Through the Confederacy with the 68th Ohio by Myron B. Loop, Edited by Richard A. Baumgartner

When the arrow was adopted as the official badge for soldiers of the 17th Corps, Army of the Tennessee, Gen. Frank P. Blair Jr. quipped that it symbolized "their swiftness, the point their firmness whenever they strike, and the feathers their liking for chickens."

Private Myron Benjamin Loop would have agreed, knowing well his own regiment's predilection for long, hard marching, fighting, and foraging. He belonged to the 68th Ohio Volunteer Infantry, a veteran 17th Corps organization that saw nearly four years' service during the Civil War, much of it under Grant, Sherman, McPherson, Logan, and Howard in the Army of the Tennessee.

Observant and steadfast in keeping a daily wartime diary, Loop later relied on it heavily to compose a memoir that was serialized in 21 issues of The National Tribune. His regiment's entire field service was traced, from Fort Donelson and the Hatchie River in 1862, Raymond, Champion Hill, and the trenches of Vicksburg in 1863, Atlanta and Savannah in 1864, to closing scenes in 1865 in North Carolina, Virginia, and Washington, D.C. Along the way the 68th Ohio traveled nearly 10,000 miles through the Confederacy, as Loop proudly pointed out: "We were on the soil of every Southern state except Texas and Florida." The journey was indeed a long one, at times fraught with intense combat and celebration of victory.

In July 1865, with the war over and Union soldiers facing muster-out, Loop reflected: "Our last evening together...was rather less chearful than many others covering a period of months and years, realizing something akin to pain, knowing that on the following day we must part, perhaps forever. While we all rejoiced in the thought of returning to the homes and friends we had left in 1861-62, yet we knew too well that the ties of comradeship which were forged around our campfires could not be sundered without many a sigh of regret."

Because an "official" 68th Ohio history never appeared in print, The Long Road Home doubles as a useful substitute. For this Blue Acorn Press presentation, historian and editor Richard A. Baumgartner has supplemented Loop's narrative with letter and diary excerpts written by 40 other regimental officers and enlisted men, and added 22 photographs and engravings.