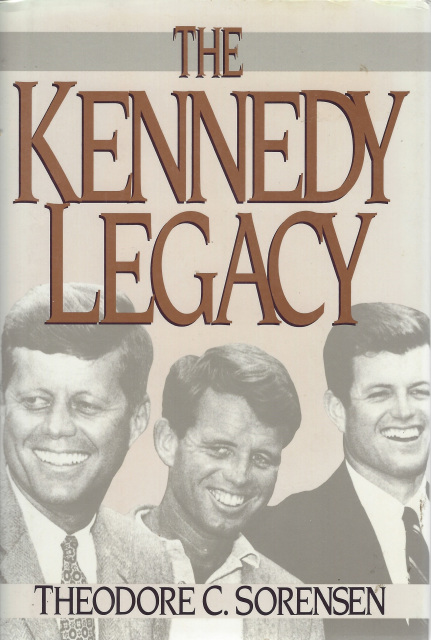 Theodore C. Sorensen spent nearly two decades closely associated with the ideas and ideals of John and Robert F. Kennedy as a trusted adviser and friend. Known as John F. Kennedy's "alter ego," lawyer, adviser, and speech-writer for eleven years, he was Special Counsel to the President from 1961 to 1964. After the publication of his bestseller Kennedy, he went back into private law practice and continued to advise and consult old friend Robert F. Kennedy on policy and politics, eventually becoming his campaign manager and working unwaveringly until Robert, too, was assassinated. With the rejection by the 1968 Democratic Convention of the Vietnam "peace plank" and the subsequent movement of popular political thought toward conservatism, it was widely assumed that the concepts and philosophy of John and Robert Kennedy had also died in that Los Angeles hospital.

With the current political climate, itis now more obvious than ever that The Kennedy Legacy is a work of great importance, as timely and evocative now as it was almost twenty-five years ago. The Kennedy Legacy speaks clearly and gracefully, offering hope and reason to millions of despairing young Americans of every creed, sex, and color, and to the less fortunate throughout the world. This twenty-fifth anniversary edition is a reclaiming of those values and ideals that have always been important to us. Also included is a new foreword by the author for this special edition, placing this volume in perspective for the coming years.

The Kennedy Legacy is not just a biography -- it traces the genesis, development, contrasts and contents of the Kennedy ideals as they evolved in the lives and behind-the-scenes thoughts of these two remarkable brothers. Because Sorensen was privy to the shaping of that legacy for over sixteen years, his first-hand accounts prove to be historically invaluable. Sorensen covers such topics as the withdrawal of troops from Vietnam; the feud between Robert Kennedy and LBJ; and what the Kennedys thought about Dean Rusk, the CIA, Communist China, and wire-tapping.

But most importantly, The Kennedy Legacy looks ahead, hoping to provide compassionate, commonsense answers to the impersonal and anachronistic establishment that seems to have evolved where our government should be.