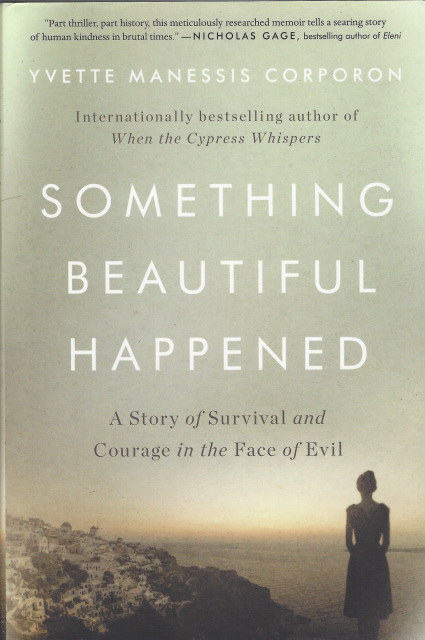 Something Beautiful Happened: A Story of Survival and Courage in the Face of Evil by Yvette Manessis Corporon

Something Beautiful Happened: A Story of Survival and Courage in the Face of Evil by Yvette Manessis Corporon

Yvette Manessis Corporon grew up listening to her grandmother's stories about how the people of their tiny Greek island, Erikousa, banded together to hide a Jewish family -- a tailor named Savvas and his daughters -- from the Nazis during WWII. She heard tales about how, against all odds, not one person on the island gave the family up, and how they survived the war.

Decades later, Yvette couldn't get the story out of her head. She wanted to know what eventually happened to Savvas and his family after the war, and, armed with just first names, she set out to find his descendants. The search took her from New York to Los Angeles to the craggy cliffs of a remote Greek island to the ancient cities of Israel. Eventually, miraculously, she found them -- people alive today because of the brave actions of the islanders of Erikousa. She succeeded in reuniting the two families with a shared past, but her celebration was halted when, three days later, Yvette's nephew was gunned down in a parking lot in Kansas, a victim of a neo-Nazi out to kill Jews.

As Yvette and her family wrestled with their own tragedy, the lessons she learned from the survivors of the Holocaust -- and her unending quest to honor the islanders who risked everything -- taught Yvette that even in the midst of unimaginable pain, beautiful things can still happen.

At once a very personal memoir and an ambitious account of the untold history of the Greek Jews, Something Beautiful Happened is a nuanced story about the importance of kindness and the courage to stand up for what's right, no matter the cost.