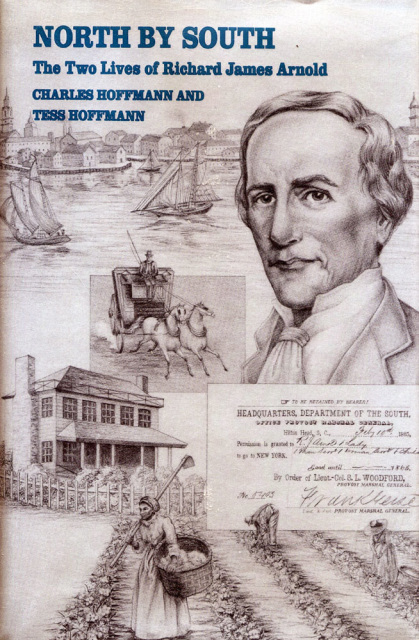 North by South: The Two Lives of Richard James Arnold by Charles Hoffmann and Tess Hoffmann

North by South: The Two Lives of Richard James Arnold by Charles Hoffmann and Tess Hoffmann

In 1823, Richard James Arnold, descendant of a Quaker family that had been directly involved in the movement to abolish slavery and the slave trade in Rhode Island, married Louisa Gindrat of Bryan County, Georgia, and acquired, as her dowry, a plantation called White Hall -- thirteen hundred acres of rice and cotton land and sixty-eight slaves. Over the next fifty years, Arnold led two distinct, if never entirely separate, lives, building through successive Georgia winters a profitable southern "paradise" rooted in human bondage, then returning each spring to his business interests and extended family in Providence and Newport, Rhode Island.

Recreating the two lives of this southern planter and northern businessman, Charles and Tess Hoffmann reveal the easy accommodation -- the compatibility and complicity -- between the sections during the years preceding the Civil War. Organized around a surviving plantation journal kept during two winters and one spring in Georgia, North by South encompasses the fifty years of Arnold's career as a rice and cotton planter as it uncovers the increasingly difficult social and moral disguises that enabled him to move freely through two worlds.

A prominent member of Providence society, Arnold retained his standing after acquiring southern properties, even serving in 18341 on a blue-ribbon commission to investigate the facts of a race riot in the city. To his peers in the upper class, Arnold's slaves were property and his dealings in the South a business. Frederick Law Olmsted, visiting White Hall in 1853, approved of what he saw, calling Arnold's plantation a "model of what slavery should be in America -- a benevolent, patriarchal and civilizing institution." As the Hoffmanns show, Arnold's two-year journal of plantation life supports this image of a kind and energetic master. Recording the details of cotton and rice cultivation, entering the gross product of slave labor -- "750 pounds of cotton ginned," "3170 bushels of rough rice loaded into boats" -- the journal reveals as well Arnold's efforts to keep slave families intact, to see to their religious instruction and physical health.

Yet as the nation moved toward civil war, Arnold could no longer maintain his dual lives. The polite, apolitical indifference to slavery that had characterized Arnold's summers gave way to opposition to secession. When war did come, Arnold left for the North, leaving two sons in the South who would take over the plantations and fight for the Confederacy. At war's end, he returned to the South, investing much of his northern capital in restoring lands devastated by Sherman, yet saved from confiscation because of political contacts and his northern citizenship. Gathering around him many of his former slaves, Arnold reconstructed the past and expanded rice production, paying wages instead of rations to his hands.

North by South ends in 1875, two years after the death of Richard James Arnold, with the auction of the Georgia plantation. A wealthy, successful entrepreneur from old New England, Arnold had embarked in 1823 on a dual life that, in its seasonal migrations, in its familiarity with two distinct, increasingly separate worlds, embodies the paradoxical, often contradictory history of antebellum America.

The University of Georgia Press, Hardcover, 1988