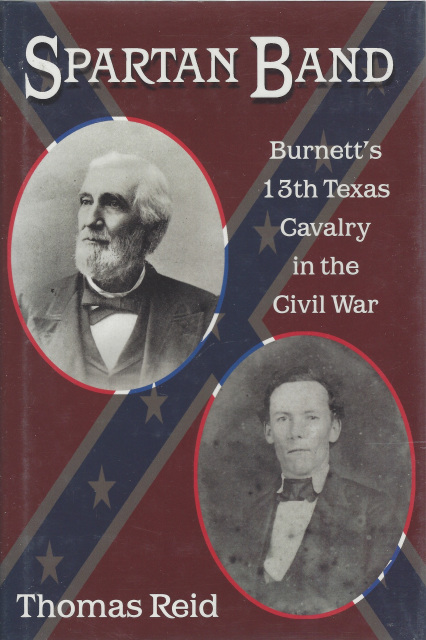 In Spartan Band (which comes from the eulogistic poem the regiment's first chaplain wrote for the late Capt. William Blewitt), author Thomas Reid traces the Civil War history of the 13th Texas Cavalry, a unit drawn from eleven counties in East Texas. Two Texas Senators, John H. Burnett and Anderson F. Crawford, organized "Burnett's Texas Mounted Volunteers" in the spring of 1862. After crossing the Red River into Arkansas, however, the cavalry unit was ordered to dismount. The 13th served as infantry until the end of the war, but unlike most Texan Confederate units, they served in a division drawn entirely from their native state.

The regiment gradually evolved into a tough, well-trained unit during action at Lake Providence, Fort De Russy, Mansfield, Pleasant Hill, and Jenkins' Ferry, as part of Maj. Gen. John G. Walker's Texas division in the Trans-Mississippi Department. The 13th Texas disbanded at Hempstead, Texas in late May, 1865. Following the war, Confederate veterans in Texas were generally held in high regard in their communities, which improved their chances for political office or for securing favorable treatment in business and employment.

This is the first contemporary history of the 13th Texas Cavalry and its role in defeating Union attacks aimed at Texas. Their story has been overshadowed by events in the Eastern Theater, but now receives the attention it deserves.