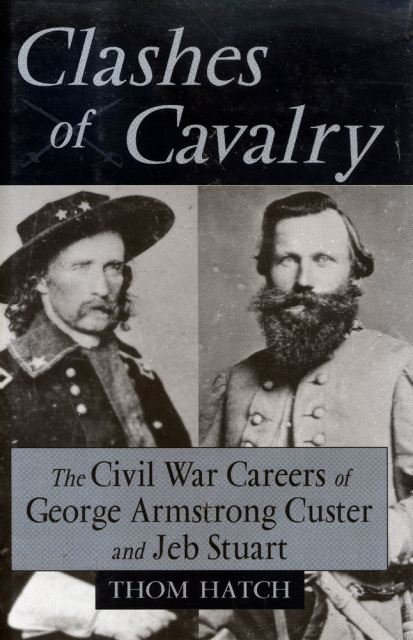 This is the story of two remarkable men, both natural-born cavalry leaders of great courage, who shared similar traits. Their Civil War legacies were destined to be connected in a series of battles -- beginning with Brandy Station where Custer's star rapidly rose, at Gettysburg where Stuart's star became tarnished, and continuing to Yellow Tavern where Stuart was killed.

Unlike most standard biographies, Clashes of Cavalry takes an innovative approach to chronicling the lives of these two Civil War giants by not only depicting their lives and exploits individually, but also by examining the role of each in specific battles in which they both participated.

Author Thom Hatch first sets the stage with in-depth portrayals of "Beauty" Stuart and "Fanny" Custer, exploring how the early years of the two future cavaliers shaped their eventual military careers. Both born to conservative rural families, educated at West Point, and with sensitive yet outgoing personalities, Custer and Stuart shared some remarkable similarities. These early chapters follow the two young cavaliers through the first two years of the war, leading up to the largest cavalry engagement of the century at Brandy Station in 1863. Both Custer and Stuart participated in the action that day, with the twenty-three-year-old Custer faring far better than Stuart. Custer's performance earned him the attention and respect of his superiors and started him down the path that would eventually lead to his promotion. Stuart, however, was blamed for the "needless slaughter" of his men by the Union's surprise attack and faulted for his overconfidence.

Both Custer and Stuart's careers continued through battles at Gettysburg, the Bristoe Campaign, and the Wilderness. While Stuart was destined to fall at Yellow Tavern, Custer went on to even greater success, culminating with an assault on the Confederates at Appomattox Court House that essentially ended the war.

Clashes of Cavalry paints a vivid portrait of both these brilliant cavalrymen. Although Custer never enjoyed the same level of command as Stuart, there is reason to believe that given the same opportunity he would have been equal to the task. History has remembered both as gifted horsemen and inspired leaders, truly among the most celebrated heroes of the Civil War.