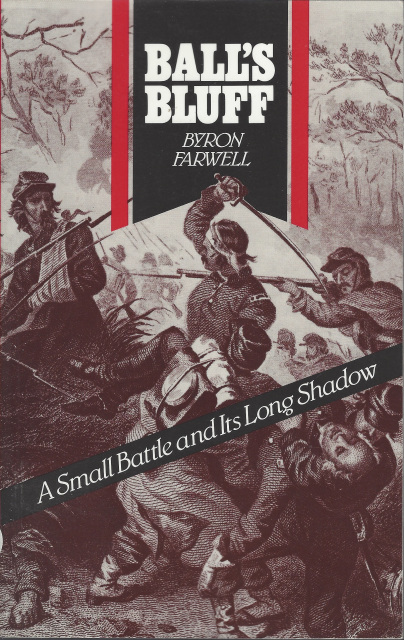 Ball's Bluff: A Small Battle and Its Long Shadow by Byron Farwell

Ball's Bluff: A Small Battle and Its Long Shadow by Byron Farwell

On October 21, 1861, Confederate troops scored what was probably the most complete victory by either side in the Civil War at a place called Ball's Bluff, thirty-five miles west of Washington, D.C., on the Virginia bank of the Potomac River. Union soldiers were driven in a panic off the high bluff into the river, where many of them drowned.

Although the two armies totaled only about 3,300 men -- a tiny fraction of the numbers involved in the great battles that came later -- the effects of this encounter were enormous on both sides, particularly in the North. Careers and reputations were launched and destroyed, and a popular U.S. senator was killed. Some of the nation's brightest young men were needlessly sacrificed. Southerners accorded the battle too much importance, boosting hopes for an ultimate Confederate triumph. Northern morale was crushed, and so spectacular and unexpected was the defeat that many refused to accept it. In a shameful investigation that rivaled the worst abuses of the McCarthy era a century later, humiliated Union politicians sought and found a scapegoat. Through a quirk of history the leader of this lynch-mob mischief very nearly became president.

Balls Bluff contains all the elements of great battles of any war: courage and cowardice, exultation and pity, pain, cruelties, carnage, terror, coincidences and bizarre happenings. George Washington's nephew and Paul Revere's grandsons were improbable enemies in the fight; Oliver Wendell Holmes, Jr., later one of America's greatest jurists, survived a bullet through his chest. The first blacks to fight in the war were there, and a woman, dressed as a rebel soldier, claimed to have taken part. Even now many people believe the battlefield is haunted by a mysterious phantom who led the Union's last desperate charge.

THIS IS A BRAND NEW BOOK WITH LITTLE OR NO SHELFWEAR.