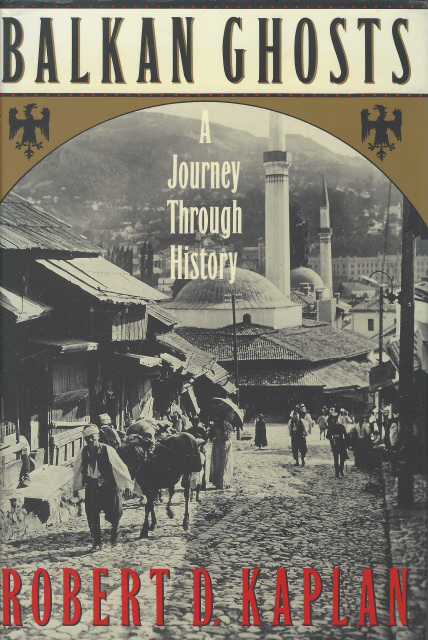 Balkan Ghosts: A Journey Through History by Robert D. Kaplan

Balkan Ghosts: A Journey Through History by Robert D. Kaplan

Like an old photograph found suddenly in a dusty attic, the Balkan Peninsula is once again back at center stage. Here is where twentieth-century history began -- with the assassination of the Archduke Franz Ferdinand in Sarajevo -- and where it will likely end. Yet few of us truly comprehend the nature of the blood feuds that have recently been rekindled. In the tradition of Rebecca West and Paul Theroux, veteran reporter, travel writer, and essayist Robert D. Kaplan offers an eloquent and incisive exploration into the heart of what he calls "history's cauldron."

Kaplan's odyssey takes the reader from Vienna to near Istanbul: through southern Austria and Croatia. Old Serbia and Albania: to the historical chaos of Macedonia, the next time bomb: to the brooding, beech-covered mountains of Romania that inspired Bram Stoker: and the Byzantine mysteries of Bulgaria. Last, he exposes the psychological realities of the best known but least understood of the Balkan countries: Greece.

Balkan Ghosts moves from city to countryside, traveling by rail, riverboat, and hitchhiker's thumb. In his rucksack, Kaplan carried only one change of clothing but many old books. He visited monasteries and discotheques and talked with peasants and professors, priests and prostitutes, old Jews and young anti-Semites. Rather than mere travel writing, the author, a foreign affairs columnist for The Atlantic, uses landscape as a vehicle to reveal the past and the very process of history.

Though Kaplan passes through many different countries, this not a survey book. Balkan Ghosts progresses vertically from the most specific to the most general: from an essay about the war guilt (or innocence) of one Croatian cleric to speculation about the fall of empires. Here is the essential painting in prose form of a region in which Yugoslavia is only a part. Kaplan does nothing less than take the reader inside the minds of people condemned to hate, yet struggling to free themselves of their bloody history. This is a book that, once read, is impossible to forget.