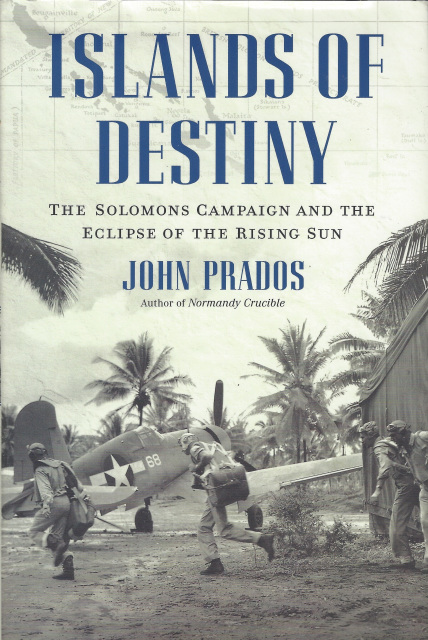 ISLANDS OF DESTINY: THE SOLOMONS CAMPAIGN AND THE ECLIPSE OF THE RISING SUN by John Prados

Islands of Destiny: The Solomons Campaign and the Eclipse of the Rising Sun by John Prados

Historians traditionally refer to the Battle of Midway as the point when Allied forces gained the advantage over the Japanese. In Islands of Destiny, John Prados points out that the Japanese forces quickly regained strength after Midway and continued their assault undaunted. Taking this surprising fact as the start of his inquiry, he began to investigate how and when the Pacific tide turned in the Allies' favor. His search led him to the decisive battles and strategic maneuvers in the fight for the Solomon Islands.

Beginning with the invasion of Guadalcanal in August 1942, the Solomons became a hotly contested battleground for more than a year, culminating in the isolation of Rabaul by the Allies. As military forces fought over the strategically important islands, a secret war of intelligence was also being waged. For a total picture of the conflict, Prados integrates blow-by-blow action on the ground with the code breaking, aerial reconnaissance, secret spy posts, and submarine scouting that were vital to the Allied effort.

The Solomons arena saw some of the most intense combat of WWII -- from major naval actions, including a key confrontation between battleships, to air battles that took place almost daily. With expert knowledge and crystal clear prose, John Prados illustrates why these events were not only thrilling, but pivotal in the Allies' path to victory.