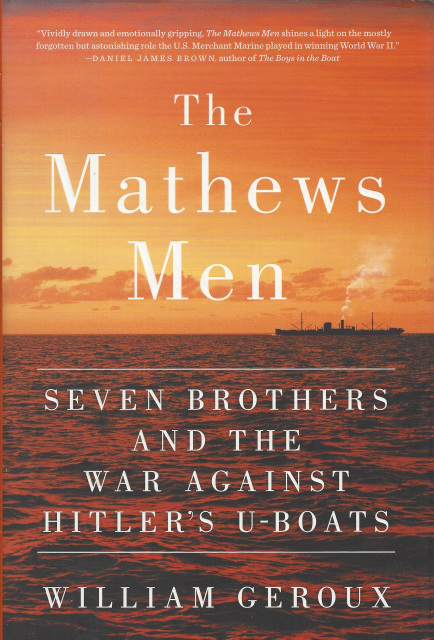 THE MATHEWS MEN: SEVEN BROTHERS AND THE WAR AGAINST HITLER'S U-BOATS by William Geroux

One of the indelible images of World War II is of an explosion at sea -- a U-boat attack, a ship in flames, and an ocean full of men swimming for their lives through oil and debris. The Mathews Men tells the story of what it was like to be on those ships in an almost unknown epic sea battle that took place just off the coast of America. Its heroes were the men of the U.S. Merchant Marine, celebrated at long last in William Geroux's unforgettable new book.

Mathews County, Virginia, is a remote outpost on the Chesapeake Bay with little to offer except unspoiled scenery. Its men had gone to sea for generations, but in 1942, Mathews mariners suddenly found themselves in the crosshairs of a lethal fleet of U-boats bearing down across the Atlantic. The Germans were determined to sink every American merchant ship they could, to strangle the flow of fuel, arms, and supplies to the Allies. The U.S. Navy initially lacked the inclination and resources to protect the unarmed vessels, and the carnage was staggering. Ships were sometimes torpedoed before the eyes of tourists on American beaches.

Nearly every family in tiny Mathews had a personal stake in the U-boat war, and none had a greater one than that of Captain Jesse and Henrietta Hodges and their seven sons. The Hodges family would experience the war in all its horrors and triumphs around the world, from the Gulf of Mexico to the Indian Ocean to the Arctic Circle. Drawing on interviews with the last living Mathews mariners, family records, diaries, letters, and official documents, Geroux describes how men survived torpedo explosions, flaming oil slicks, storms, shark attacks, and harrowing lifeboat odysseys -- only to ship out again as soon as they'd returned to safety. Merchant mariners often died terrible deaths, and suffered a higher casualty rate than any branch of the U.S. military except the Marines -- but were denied veterans benefits for decades.

This is a story of valor without glory, of the men who made sure no Allied invasion force was ever thrown back from a beachhead into the sea for want of supplies or weaponry. Merchant mariners landed at D-Day and delivered the crew of the Enola Gay to the Pacific, and when the war was over, it was Merchant Marine ships that brought the troops home. Geroux evokes in vivid human detail a war beyond the familiar battlefields and its toll on the families back home. Unrecognized by the government, unheralded in the history books, the achievements and sacrifices of the Merchant Marine have been largely ignored -- until now.