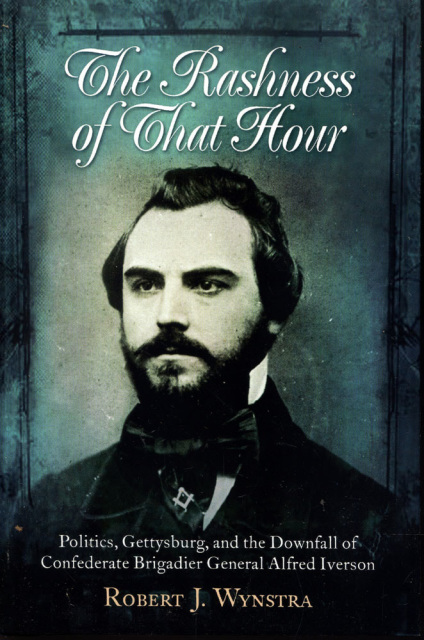 The Rashness of That Hour: Politics, Gettysburg, and the Downfall of Confederate Brigadier General Alfred Iverson by Robert J. Wynstra

The Rashness of That Hour: Politics, Gettysburg, and the Downfall of Confederate Brigadier General Alfred Iverson by Robert J. Wynstra

No commander in the Army of Northern Virginia suffered more damage to his reputation at Gettysburg than did Brig. Gen. Alfred Holt Iverson. In little more than an hour during the early afternoon of July 1, 1863, much of his brigade (the 5th, 12th, 20th, and 23rd North Carolina regiments) was slaughtered in front of a stone wall on Oak Ridge. Amid rumors that he was a drunk, a coward, and had slandered his own troops, Iverson was stripped of his command less than a week after the battle and before the campaign had even ended.

After months of internal feuding and behind-the-scenes political maneuvering, the survivors of Iverson's ill-fated brigade had no doubt about who to blame fore their devastating losses. What remained unanswered was the lingering uncertainty of how such a disaster could have happened. This and many other questions are explored for the first time in Robert J. Wynstra's The Rashness of That Hour.

Wynstra's decade-long investigation draws upon a wealth of previously unpublished sources to provide readers with fresh perspectives and satisfying insights. The result is an engrossing chronicle of how the brigade's politics, misadventures, and colorful personalities combined to bring about one of the Civil War's most notorious blunders. As Wynstra's research makes clear, Iverson's was a brigade in fatal turmoil long before its rendezvous with destiny in Forney field on July 1.

This richly detailed and thoughtfully written account is biographical, tactical, and brigade history at its finest. For the first time we have a complete picture of the flawed general and his brigade's bitter internecine feuds that made Iverson's downfall nearly inevitable and help us better understand "the rashness of that hour."