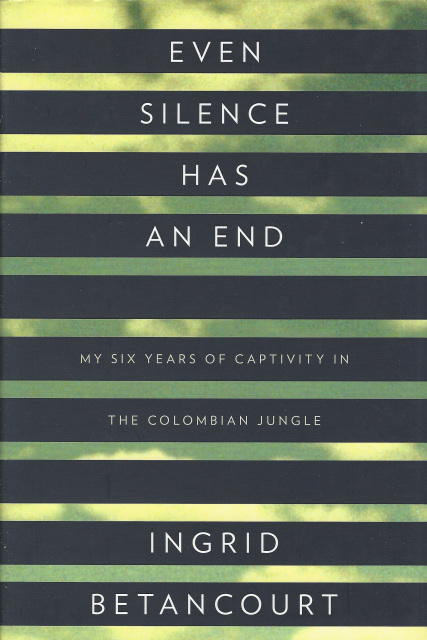 Even Silence Has an End: My Six Years of Captivity in the Colombian Jungle by Ingrid Betancourt

Even Silence Has an End: My Six Years of Captivity in the Colombian Jungle by Ingrid Betancourt

In the midst of her campaign for the Colombian presidency in 2002, Ingrid Betancourt traveled into a military-controlled region where the conflict with the FARC was being waged. An advocate for peace between the brutal terrorist organization and the government, she had made such trips many times before. But nothing could have prepared her for what would come next. She was abducted by the FARC and would spend the next six and a half years captive in the depths of the Colombian jungle. Even Silence Has an End is her deeply moving and personal account of that time.

Chained day and night for much of her captivity, she never stopped dreaming of escape, getting away several times, always to be recaptured. The facts of her story are astounding, but it is Betancourt's indomitable spirit that drives this very special account. Attending as intimately to the landscape of her mind as to the events of her captivity, Even Silence Has an End is a meditation on the very stuff of life -- fear and freedom, hope and what inspires it.

Betancourt shares her metamorphosis, revealing how in the daily rituals she established for herself -- listening to her mother and two children broadcast to her over the radio, daily prayer, learning to weave, helping others -- she was able to do the unthinkable: to move through the pain of the moment and find a place of serenity. In 2008 she was spectacularly freed by the Colombian army and at last reunited with her teenage children.

Her story offers an intensely intelligent, thoughtful, and compassionate reflection on what it really means to be human.