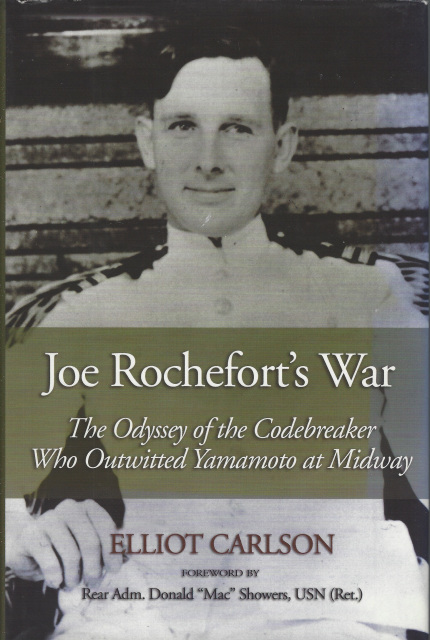 Joe Rochefort's War: The Odyssey of the Codebreaker Who Outwitted Yamamoto at Midway by Elliot Carlson

Joe Rochefort's War: The Odyssey of the Codebreaker Who Outwitted Yamamoto at Midway by Elliot Carlson

Elliot Carlson's biography of Capt. Joe Rochefort is the first to be written about the officer who headed Station Hypo, the U.S. Navy's signals monitoring and cryptographic intelligence unit at Pearl Harbor, and whose team broke the Japanese navy's code before the Battle of Midway. The book brings Rochefort to life as the irreverent, fiercely independent, and consequential officer that he was. Readers share his frustrations with the search for Yamamoto's fleet prior to the Japanese attack on Pearl Harbor, but share his joy when Hypo succeeds in tracking the fleet in early 1942 and breaks the code that leads Rochefort to believe Yamamoto's invasion target is Midway. His conclusions, bitterly opposed by some top Navy brass, are credited with making the U.S. victory possible and helping to change the course of the war. The author tells the story of how opponents in Washington forced Rochefort's removal from Station Hypo and denied him the Distinguished Service Medal recomMended by Admiral Nimitz. In capturing the interplay of policy and personality and the role played by politics at the highest levels of the Navy, Carlson reveals a side of the intelligence community seldom seen by outsiders.

For a full understanding of the man, Carlson examines Rochefort's love-hate relationship with cryptanalysis, his adventure-filled years in the 1930s as the right-hand man to the Commander in Chief of the U.S. Fleet, and his return to codebreaking in mid-1941 as the officer in charge of Station Hypo. He traces Rochefort's career from his enlistment in 1918 to his posting in Washington as head of the Navy's codebreaking desk at age twenty-five, and beyond. In many ways a reinterpretation of Rochefort, the book makes clear the key role his codebreaking played in the outcome of Midway and the legacy he left of reporting actionable intelligence directly to the fleet. An epilogue describes efforts waged by Rochefort's colleagues to obtain the medal denied him in 1942 -- a drive that finally paid off in 1986 when the medal was awarded posthumously.