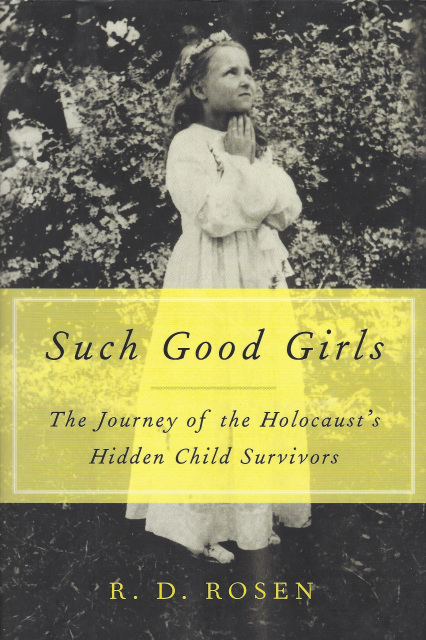 Such Good Girls: The Journey of the Holocaust's Hidden Child Survivors by R.D. Rosen

Such Good Girls: The Journey of the Holocaust's Hidden Child Survivors by R.D. Rosen

Sophie -- pictured on the cover -- survived the Holocaust without even knowing she was Jewish, while her terrified, widowed mother worked for the Nazis in Poland under the guise of a Christian bookkeeper.

Flora, orphaned by Final Solution, was shuttled through southern France, from convents to the homes of one Christian family after another, unsure of who she really was.

Carla and her family took shelter in the apartment of a Dutch barber, while one floor below, the man who protected them would cut German soldier's hair.

Sophie Turner-Zaretsky, Flora Hogman, and Carla Lessing (and her husband, Ed) survived not only the Holocaust -- among the mere 10 percent of European Jewish children who did -- but their own survival. Each of them ended up in New York, where they slowly emerged from the traumas of their childhoods, devoted their careers to helping others, and played important roles in the groundbreaking 1991 event that, for the first time, brought together the hidden child survivors scattered around the world.

A chance meeting with Sophie sent author R.D. Rosen, a privileged Jewish American child of the suburbs, on a journey to grasp the scope of Nazi extermination of Europe's Jews and to honor hidden children, the very last generation of survivors to have witnessed the Holocaust firsthand.