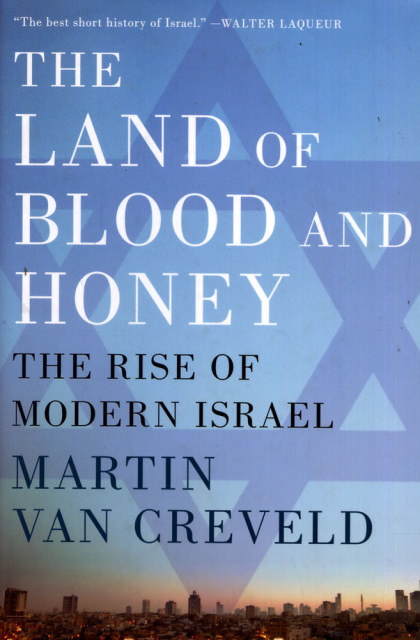 The Land of Blood and Honey: The Rise of Modern Israel by Martin Van Creveld

The Land of Blood and Honey: The Rise of Modern Israel by Martin Van Creveld

"The greatest success story in the entire twentieth century."

Preeminent historian Martin van Creveldd shows the state of Israel to be just that: an unparalleled story of success and triumph that is even more improbably considering the overwhelming odds it has faced throughout its embattled yet, unyielding, history. In this crisp volume, the author skillfully relates the unlikely story of a people without a home who, given a hot and arid patch of land -- and coping with every imaginable obstacle -- founded a nation that has become the envy of surrounding states.

The author reveals the complex forces behind this nation forged in fury, from its Zionist beginnings at the end of the nineteenth century, through its realization, up to the present day. He expertly chronicles its early footsteps after the War of Independence of 1948, the "nightmare years" from 1967 to 1980, and the new challenges faced by Israel at the end of the last century and into the present one.

While deeply erudite on the myriad factors that have shaped the history of Israel, The Land of Blood and Honey also offers a lively examination of the Israeli people themselves. The author deftly considers their rich social, cultural, and religious traditions, as well as the dynamic tensions between the traditional and modern, Orthodox and secular, and even between the sexes.

Finally, while celebrating Israel's military shrewdness and industrial ingenuity, van Creveld also offers an even-handed assessment of its domestic and foreign policies and suggests ideas that might point the way toward a larger peace in the Middle East. A concise, yet definitive, one-volume history of Israel, The Land of Blood and Honey illuminates this singular nation and its storied people.