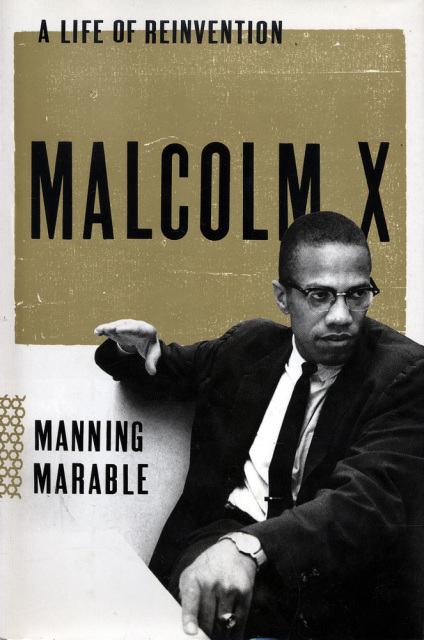 MALCOLM X: A LIFE OF REINVENTION by Manning Marable

Malcolm X: A Life of Reinvention by Manning Marable

Of the figures who tower over twentieth-century American history, few are as complex, multifaceted and controversial as Malcolm X. Constantly rewriting his own story, he became a criminal, a minister, a leader, and eventually an icon, all before being felled by assassins' bullets at the age of thirty-nine. Manning Marable's new biography of Malcom is a stunning achievement, the culmination of years of research and dogged pursuit of Malcolm's friends, enemies, and fellow travelers, many of whom have rarely or never before spoken about him on the record. Filed with startling revelations and new information from long-suppressed private and government files, it presents the most complete picture ever set down of the man Ossie Davis memorialized as "our living, black manhood."

The details of Malcolm's life have long since calcified into a familiar narrative: his early years as a vagabond in Boston and New ork, his conversion to Islam and subsequent rise to prominence as a militant advocate for black separatism, his acrimonious split with the Nation of Islam, and ultimately his violent death at their hands. Yet this story, told and retold to various ends by writers, historians, and filmmakers, captures only a snapshot, a fraction of the man in full. Even Malcolm's Autobiography, a remarkable document that has formed the basis of what we think we know about him, is ultimately elusive, the result of his own evasions and the subtle shapings of his collaborator, Alex Haley. To truly understand Malcolm, we need to go deeper, to find the source of his voluminous rage and charisma, and to learn more about the terrible secrets of his untimely death.

Malcolm X unfolds a sweeping story of the darkest days of racial unrest, from the rise of the Ku Klux Klan to the struggles of the civil rights movement. Marable reaches deep into Malcolm's troubled youth, tracing a path from the activism of his Garveyite parents through his own leadership in the Nation of Islam and examining the relationships whose energy alternately drained him and pushed him to unimagined heights. For decades, the details of Malcolm's time in Africa have been unknown, finally, they will be revealed. And here is the real story of Malcolm's long unsolved assassination, a tale of betrayal and corruption startling in its particulars and terrifying in its echoes in the present day.

Malcolm X will stand as the definitive work on one of the most important figures in the history of civil rights, surpassing previous treatments in its depth and intensity and capturing with revelatory clarity a man who constantly strove, in the great American tradition, to remake himself anew.