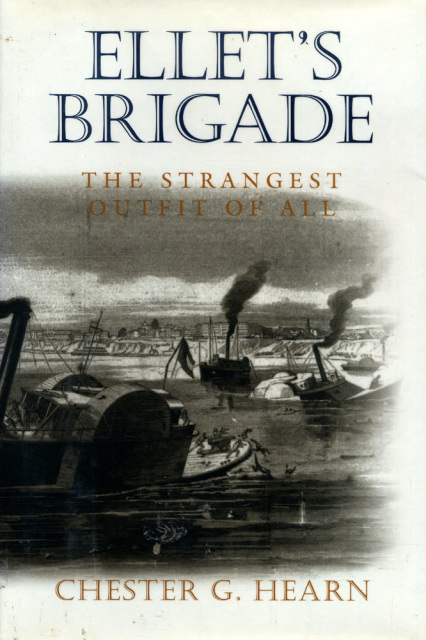 Ellet's Brigade: The Strangest Outfit of All by Chester G. Hearn

Ellet's Brigade: The Strangest Outfit of All by Chester G. Hearn

Soon after the start of the Civil War, during the naval buildup on the central Mississippi River, celebrated engineer Charles Ellet, Jr., formed the Ram Fleet under U.S. secretary of war Edwin M. Stanton. Perhaps the most bizarre unit organized by the Union, the rams were shunned by both the army and teh navy as useless instruments of war. However, on June 6, 1862, they proved their worth by defeating the Confederate ironclads at Memphis while the U.S. Navy simply watched. In this lively study, the first on the rams since 1905, Chester G. Hearn details the formation and wartime exploits of Ellet's fleet, reviving the history of this fascinating but forgotten brigade.

Though a staunch supporter of the Union, Charles Ellet entered the war mainly to test a theory the Navy Department rejected -- that fast, unarmed rams could win battles against conventional gunboats. He manned his original Fram Fleet with daring civilian boatmen, a small sprinkling of infantry to act as boat guards, and thirteen family members as officers, including his brother, Alfred, who assumed command when Charles was mortally wounded at Memphis. The navy had no interest in Ellet's rams and no army commander wanted to be burdened with a small fleet of unarmed river boats he was forbidden to use as transports, so Stanton retained control of the flotilla himself, leading to months of command confusion. The secretary, annoyed by the unit's often reckless behaviour, then turned the brigade over to Secretary of the Navy Gideon Welles, who in turn gave charge of the fleet to Rear Admiral David Dixon Porter. Porter, too, had problems with the Ellets and divested command of the unit to army general Ulysses S. Grant.

By that time, the force nobody wanted had grown to include the Mississippi Marine Brigade, another flotilla of fast riverboats formed by Alfred Ellet to transport the brigade's mounted companies to trouble spots along the river. Although the unit performed some useful services, it often followed its own agenda, plundering plantations and small towns under the pretext of fighting guerrillas. Grant's subordinates, unable to control the brigade, ultimately disbanded it in the late summer of 1864.

The army lost or destoyed many of the brigade's records upon its dissolution, but through painstaking research Hearn has constructed its colorful history. Filling a void in the annals of operations along the Mississippi, Tennessee, and Red Rivers, Ellet's Brigade will be welcomed by scholars and buffs alike as a rare glimpse into one of the few remaining unexplored facets of the Civil War.