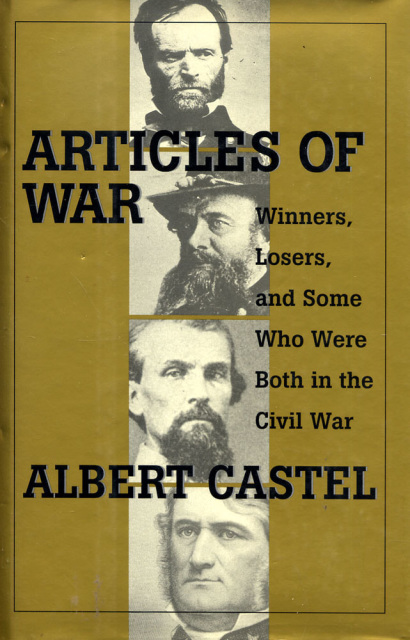 ARTICLES OF WAR: WINNERS, LOSERS, AND SOME WHO WERE BOTH IN THE CIVIL WAR by Albert Castel

Articles of War: Winners, Losers, and Some Who Were Both in the Civil War by Albert Castel

The American Civil War is filled with fascinating characters. This collection of biographical essays on the "winners and losers" of the Civil War covers some of the most intriguing: Ulysses S. Grant, George B. McClellan, Sam Houston, Albert Sidney Johnston, Nathan Bedford Forrest, and William Clarke Quantrill, to name just a few.

Noted Civil War historian Albert Castel sets the stage for his "winners and losers" with his prologue "How the War Began: Fort Sumter -- 1861." As Castel see it, Fort Sumter was essentially a political duel between Abraham Lincoln and Jefferson Davis. In this extended battle, Davis was the "winner" in the short term, gaining the fort and the addition of four more states to the infant Confederacy. But, as Castel notes, despite Lincoln's defeat, the North's resulting determination to maintain the Union made him -- after four years of carnage -- the ultimate winner.

Castel presents his winners and losers by grouping together the "winners," the losers," as well as "some winners who became losers," and some losers who became winners." Throughout the articles, Castel's distinctive writing style and sharp wit shine through. Finally, in a fitting epilogue to the book, Castel weighs in on "Why the North Won and the South Lost," in which he provides his own controversial ranking of the top Union commanders.

The pieces featured in Articles of War represent a broad cross-section of Castel's scholarship; most were written over a fifty-year period for publication in national "popular history" magazines such as American Heritage, Civil War History, and Civil War Times Illustrated. All have been edited and updated, and each is prefaced by a brief introduction by the author.