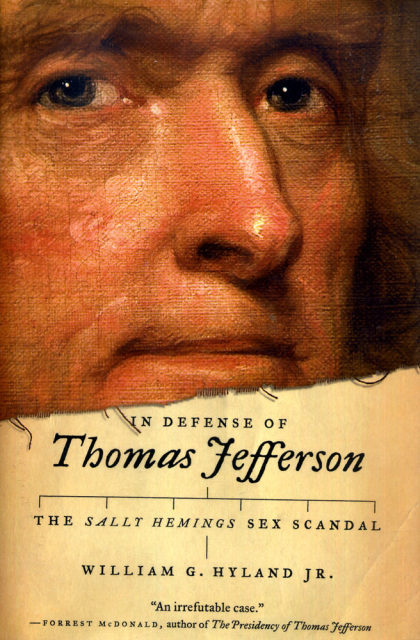 The belief that Thomas Jefferson had an affair and fathered a child (or children) with slave Sally Hemings -- and that such an allegation was "proven" by DNA testing -- has become so pervasive in American popular culture that it is not only widely accepted, but taught to students as historical fact. But as William G. Hyland Jr. demonstrates, the "fact" is nothing more than the accumulation of salacious rumors and irresponsible scholarship over the years, much of it inspired by political grudges, academic opportunism, and the trend of historical revisionism that seeks to drag the reputation of the Founding Fathers through the mud. In this startling and revelatory argument, Hyland shows not only that the evidence against Jefferson is lacking, but that in fact he is entirely innocent of the charge of having sexual relations with Hemings.

Historians have the wrong Jefferson. HNyland, an experienced trial lawyer, presents the most reliable historical evidence while dissecting the unreliable, and in doing so he cuts through centuries of unsubstantiated charges. The author reminds us that the DNA tests identified Eston Hemings, Sally's youngest child, as being merely the descendant of a "Jefferson male." Randolph Jefferson, the president's wayward younger brother with a reputation for socializing among the Monticello slaves, emerges as the most likely of several possible candidates. Meanwhile, the author traces the evolution of this rumor about Thomas Jefferson back to the allegation made by one James Callender, a "drunken ruffian" who carried a grudge after unsuccessfully lobbying the president for a postmaster appointment -- and who then openly bragged of ruining Jefferson's reputation. Hyland also reveals how oral histories within the Hemings family contradict this popular rumor, and how the Jefferson allegation was popularized by fictionalized (and less-than-historical) dramas and supported by flawed scholarly research.

Reflecting both a layperson's curiosity and a lawyer's precision, Hyland definitely puts to rest the allegation of the thirty-eight-year liaison between Jefferson and Hemings. In doing so, he reclaims the nation's third president from the arena of Hollywood-style myth and melodrama and give his readers a unique opportunity to serve as jurors on this enduringly fascinating enigma of American history.