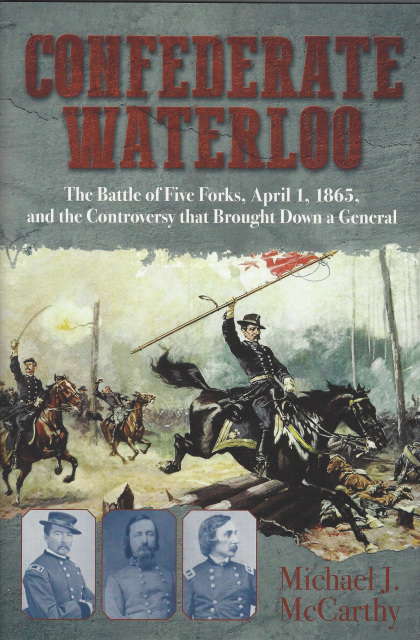 Confederate Waterloo: The Battle of Five Forks, April 1, 1865, and the Controversy that Brought Down a General by Michael J. McCarthy

Confederate Waterloo: The Battle of Five Forks, April 1, 1865, and the Controversy that Brought Down a General by Michael J. McCarthy

The Battle of Five Forks, explained former Confederate General Thomas Munford long after the Civil War, "could be classified as a mere skirmish, but no other fight of the entire four years' struggle was followed by such important consequences." The battle broke the long siege of Petersburg, triggered the evacuation of Richmond, precipitated the Appomattox Campaign, and destroyed the careers and reputations of two opposing generals. Michael J. McCarthy's Confederate Waterloo is the first fully researched and unbiased book-length account of this decisive Union victory and the unpredictable aftermath fought in the courts and at the bar of public opinion.

General Lee's Army of Northern Virginia had been locked into the sprawling defenses surrounding the logistical stronghold of Petersburg and the Southern capital at Richmond for more than eight months when General Grant launched an offensive against Lee's exposed right flank. A series of battles led up to April 1, when General Phil Sheridan's forces struck at Five Forks. The attack surprised and collapsed General George Pickett's Confederate command and turned Lee's flank. An attack along the entire front the following morning broke the siege and forced the Virginia out of its defenses and, a week later, into Wilmer McLean's parlor to surrender at Appomattox.

Despite this decisive Union success, Five Forks spawned one of the most bitter and divisive controversies in the postwar Army because Sheridan relieved V Corps commander Governeur K. Warren during the battle. The order generated a lifelong effort by Warren and his allies to restore his reputation by demonstrating that Sheridan's action was both unfair and dishonorable. The struggle climaxed with a Court of Inquiry that generated a more extensive record of testimony and exhibits than any other United States military judicial case in the 19th century. In addition to Sheridan and Warren, participants included former general Winfield S. Hancock, former general and president U.S. Grant, and an array of former Union and Confederate officers.

McCarthy's Confederate Waterloo is grounded upon extensive archival research and a foundation of primary sources, including the meticulous records of a man driven to restore his honor in the eyes of his colleagues, his family, and the American public. The result is a fresh and dispassionate analysis that may cause students of the Civil War to reassess their views about some of the Union's leading generals.