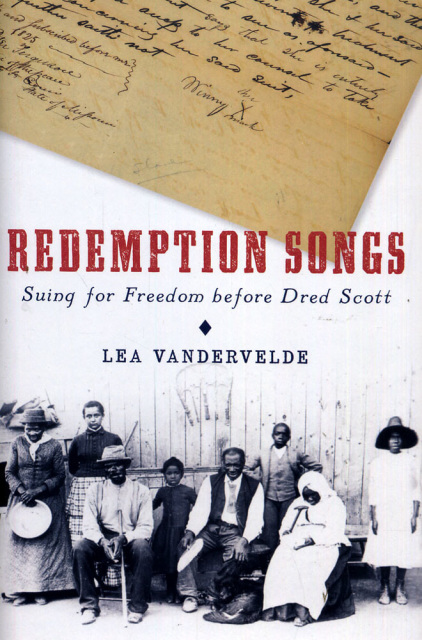 The Dred Scott case is the most notorious example of slaves suing for freedom. Most examinations of the case focus on its infamous verdict, and how it worsened the sectional crisis that eventually led to the Civil War. In conventional understanding, a slave losing a lawsuit against his master seems unremarkable. But in fact, that case was just one of many freedom suits brought by slaves in the antebellum period, just one example of slaves working within the confines of the U.S. legal system (and defying their masters in the process) in an attempt to win the ultimate prize: their freedom. And until Dred Scott, the St. Louis courts recognized the legal rights of the most oppressed members of society and declared many slaves free.

For over a decade, legal historian Lea VanderVelde has been building and analyzing a collection of more than 300 newly discovered freedom suits in St. Louis. In Redemption Songs, she describes twelve of these never-before-examined cases in close detail. Through these remarkable accounts, she takes readers beyond the conventional to weave a diverse tapestry of freedom suits and slave families' lives in the American frontier. From these court proceedings in St. Louis, a city defined by the antebellum frontier, VanderVelde reveals the unique circumstances surrounding the institution of slavery in westward expansion. Her investigation shows the wide variation of circumstances that led African-Americans held in bondage to file suit for freedom. Dred Scott's catastrophic loss at the United States Supreme Court actually ended a succession of slave lawsuits recognizing the plaintiff's right to freedom.

Beyond the successful outcomes, the very existence of these freedom suits helped to reshape the parameters of American slavery in the nation's expansion. Thanks to VanderVelde's thorough and original research, we can hear for the first time the vivid stories of a seemingly powerless group who used a legal system that was so often arrayed against them in their fight for freedom from slavery.