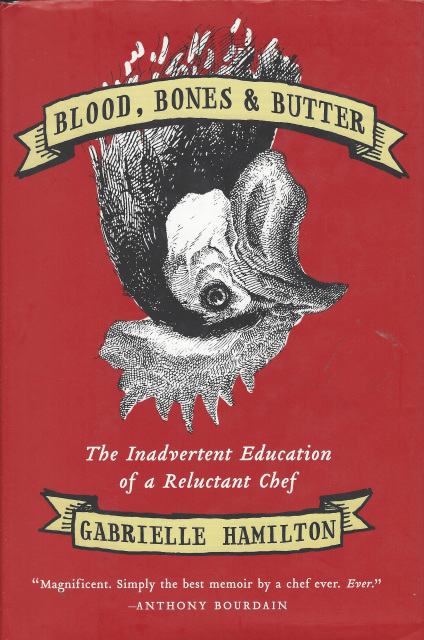 Blood, Bones & Butter: The Inadvertent Education of a Reluctant Chef by Gabrielle Hamilton

Blood, Bones & Butter: The Inadvertent Education of a Reluctant Chef by Gabrielle Hamilton

Before Gabrielle Hamilton opened her accalimed New York restaurant Prune, she spent twenty fierce, hard-living years trying to find purpose and meaning in her life. Above all she sought family, particularly the thrill and the magnificence of the one from her childhood that, in her adult years, eluded her. Hamilton's ease and comfort in a kitchen were instilled in her at an early age when her parents hosted grand parties, often for more than one hundred friends and neighbors. The smells of spit-roasted lamb, apple wood smoke, and rosemary garlic marinade became as necessary to her as her own skin.

Blood, Bones & Butter follows an unconventional journey through the many kitchens Hamilton has inhabited through the years: the rural kitchen of her childhood, where her adored mother stood over the six-burner with an oily wooden spoon in hand; the kitchens of France, Greece, and Turkey, where she was often fed by complete strangers and learned the essence of hospitality; the soulless catering factories that helped pay the rent; Hamilton's own kitchn at Prune, with its many unexpected challenges; and the kitchen of her Italian mother-in-law, who serves as the link between Hamilton's idyllic past and her own future family -- the result of a difficult and prickly marriage that nonetheless yields rich and lasting dividends.

Blood, Bones & Butter is an unflinching and lyrical work. Gabrielle Hamilton's story is told with uncommon honesty, grit, humor, and passion. By turns epic and intimate, it marks the debut of a tremendous literary talent.