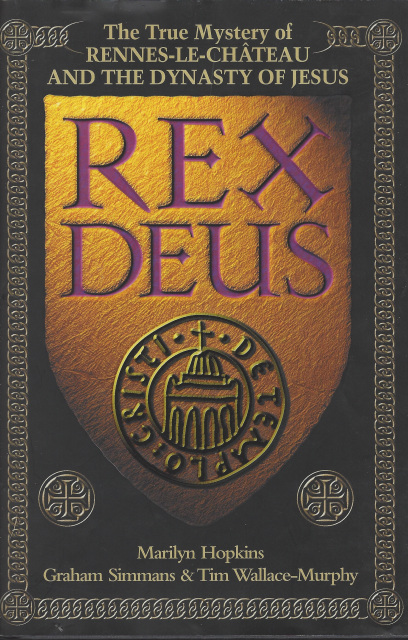 Rex Deus: The True Mystery of Rennes-Le-Chateau and the Dynasty of Jesus by Marilyn Hopkins, Graham Simmans & Tim Wallace-Murphy

Rex Deus: The True Mystery of Rennes-Le-Chateau and the Dynasty of Jesus by Marilyn Hopkins, Graham Simmans & Tim Wallace-Murphy

Rex Deus is a modern grail quest with all the accoutrements of mystery, cryptically coded documents, and tales of secret societies, persecution, and genocide.

All the threads in the quest lead to Rennes-le-Chateau, a French hilltop village with a turbulent history long associated with religious and political intrigue, secrets, and stories of buried treasure. Many claims have been made about its secrets, but the true mystery is the most unlikely claim of all -- the existence of a group of families descended from the twenty-four high priests of the Temple in Jerusalem.

The Rex Deus story is the first full examination of this shadowy dynasty whose members have repeatedly conspired together to alter the course of history, and the key role it played in the succession of the House of David to the throne of Jerusalem after the first Crusade. It reveals the real influence of this tradition on the development of European culture and the American constitution; and shows how the true teachings of Jesus Christ have been kept in trust for our benefit in the troubled times that mark the beginning of the third millennium.