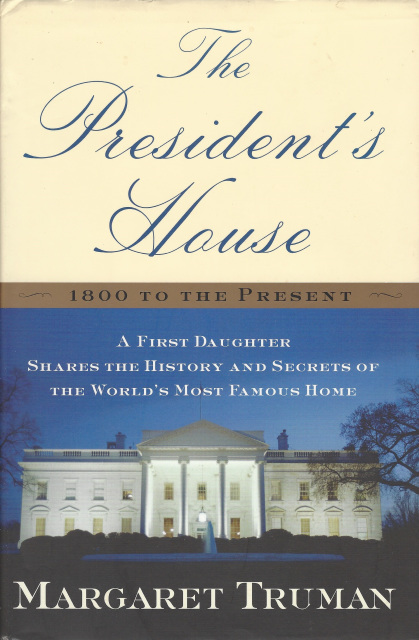 The President's House: 1800 to the Present by Margaret Truman

The President's Hous: 1800 to the Present by Margaret Truman

As Margaret Truman knows from firsthand experience, living in the White House can be exhilarating and maddening, alarming and exhausting -- but it is certainly never dull. Part private residence, part goldfish bowl, and part national shrine, the White House is both the most important address in America and the most intensely scrutinized. In this splendid blend of the personal and historic, Margaret Truman offers an unforgettable tour of "the president's house" across the span of two centuries.

Opened (though not finished) in 1800 and originally dubbed a "palace," the White House has been fascinating from day one. In Thomas Jefferson's day, it was a reeking construction site where congressmen complained of the hazards of open rubbish pits. Andrew Jackson's supporters, descending twenty thousand strong from the backwoods of Kentucky and Tennessee, nearly destroyed the place during his first inaugural. Teddy Roosevelt expanded it; Jackie Kennedy and Pat Nixon redecorated it. Through all the vicissitudes of its history, the White House has transformed the characters, and often the fates, of its powerful occupants.

In The President's House, Margaret Truman takes us behind the scenes, into the deepest recesses and onto the airiest balconies, as she reveals what it feels like to live in the White House. Here are hilarious stories of Teddy Roosevelt's rambunctious children tossing spitballs at presidential portaraits -- as well as a heartbreaking account of the tragedy that befell President Coolidge's young son, Calvin, Jr. Here, too, is the real story of the Lincoln Bedroom and the thrilling narrative of how First Lady Dolley Madison rescued a priceless portrait of George Washington and a copy of the Declaration of Independence before British soldiers torched the White House in 1814.

Today the 132 room White House operates as an exotic combination of first-class hotel and fortress, with 1,600 dedicated workers, an annual budget of over $1 billion, and a kitchen that can handle anything from an intimate dinner for 4 to a reception for 2,400. But Ghosts of the past still walk its august corridors -- including a phantom whose visit Harry S. Truman described to his daughter in eerie detail.

From the basement swarming with reporters to the Situation Room crammed with sophisticated technology to the Oval Office where the president receives the world's leaders, the White House is a beehive of relentless activity, deal making, intrigue, gossip, and of course, history in the making. In this evocative and insightful book, Margaret Truman combines high-stakes drama with the unique perspective of an insider. The ultimate guided tour of the nation's most famous dwelling, The President's House is truly a national treasure.