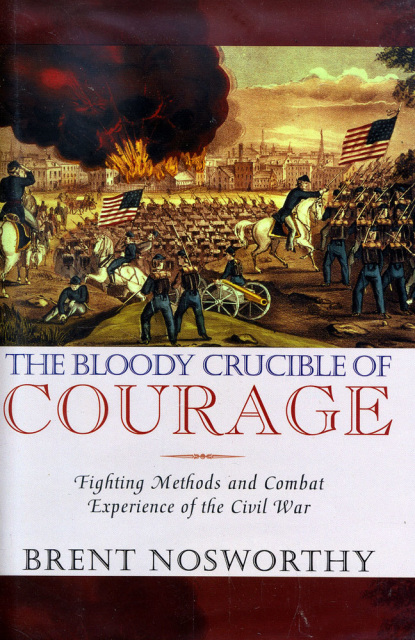 The Bloody Crucible of Courage: Fighting Methods and Combat Experience of the Civil War by Brent Nosworthy

The Bloody Crucible of Courage: Fighting Methods and Combat Experience of the Civil War by Brent Nosworthy

It's been called the first great "modern" war by some historians, a showcase for rifled muskets and artillery. Others argue that it was a sideshow of amateur generals and citizen soldiers who relied on outdated Napoleonic tactics, a was that yielded few tactical innovations or lasting lessons. The Civil War's place in the evolution of armed conflict is hotly debated to this day. In this groundbreaking achievement in Civil War scholarship, acclaimed military historian Brent Nosworthy leads an all-out attack on the many myths and misunderstandings about how the North and South fought, and for the first time in any book covers the variety of Civil War combat methods in their entirety. Now, everything from grand tactics to hand-to-hand combat during the War Between the States is given its proper due in the development of warfare.

Nosworthy weaves together the story of newly emerging weapons, the resulting changes in military doctrine, and the combatants' experiences as these innovations were applied to the battlefield. Detailing methods of warfare from General Irvin McDowell's first tentative efforts at Bull Run to Lee's and Grant's final exertions at Petersburg and Appomattox, the author examines tactical variation due to regional differences and the distinctive circumstances of each campaign, including the approaches used in the eastern theatre versus those in the west; the confused fighting in the wilderness; the "trench" warfare at Vicksburg; and the techniques used in other storied battles, like Gettysburg and Antietam. And the book recognizes the primacy of the war's most compelling voices, containing hundreds of first-hand accounts -- graphic and emotional descriptions of what it was like to see and hear a Minie ball striking a nearby companion.

Filled with over seventy diagrams, maps, and period illustrations, and endorsed by respected Civil War military historians, this book is an essential addition to every library. From readers with a casual interest in how the Civil War was fought to Civil War aficionados, the most dedicated reenactors, and the most erudite academics, The Bloody Crucible of Courage explains the doctrine, technology, and actual battlefield experience in a single revolutionary volume.