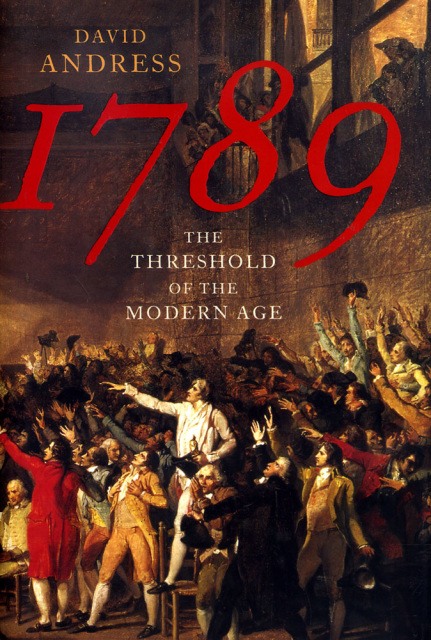 1789: The Threshold of the Modern Age by David Andress

1789: The Threshold of the Modern Age by David Andress

The world in 1789 stood on the edge of a unique transformation. At the end of an unprecedented century of progress, the fates of three nations -- France; the nascent United States; and their common enemy, Britain -- lay interlocked. France, a nation bankrupted by its support for the American Revolution, wrestled to seize the prize of citizenship from the ruins of the old order. Disaster loomed for the United States, too, as it struggled, in the face of crippling debt and inter-state rivalries, to forge the constitutional amendments that would become known as the Bill of Rights. Britain, a country humiliated by its defeat in America, recoiled from tales of imperial greed and the plunder of India as a king's madness threw the British constitution into turmoil. Radical changes were in the air.

A year of revolution was crowned in two documents drafted at almost the same time: the French Declaration of the Rights of Man and the American Bill of Rights. These texts gave the world a new political language and promised to foreshadow new revolutions, even in Britain. But as the French Revolution spiraled into chaos and slavery experienced a rebirth in America, it seemed that the budding code of individual rights would forever be matched by equally powerful systems of repression and control.

David Andress reveals how these events unfolded and how the men who led them, such as Benjamin Franklin, Thomas Paine, Emmanuel-Joseph Sieyes, and George Washington, stood at the threshold of the modern world. Andress shows how the struggle of this explosive year -- from the inauguration of George Washington to the birth of the cotton trade in the American South; from the British Empire's war in India to the street battles of the French Revolution -- would dominate the Old and New Worlds for the next two centuries.