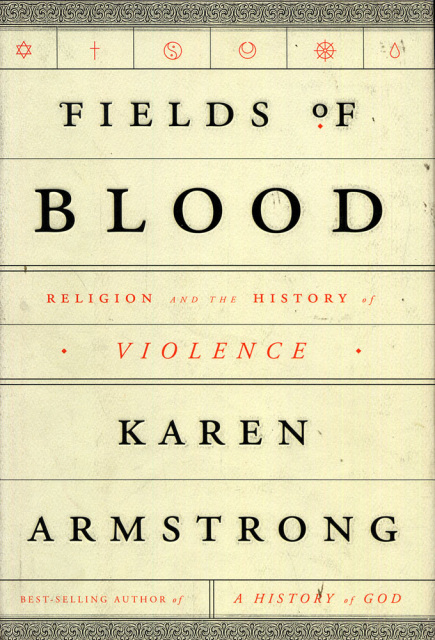 Fields of Blood: Religion and the History of Violence by Karen Armstrong

SKU:
$14.00
$14.00
Unavailable
per item
Fields of Blood: Religion and the History of Violence by Karen Armstrong

For the first time, religious self-identification is on the decline in America. Some analysts have cited as a cause a post-9/11 perception: that faith is a source of aggression, intolerance, and divisiveness -- something bad for society. But how accurate is that view? With deep learning and sympathetic understanding, Karen Armstrong sets out to discover the truth about religion and violence in each of the world's great religious traditions, taking us on an astonishing journey from prehistoric times to the present.

While many historians have looked at violence in connection with particular religious manifestations (jihad in Islam, or Christianity's Crusades), Armstrong looks at each faith -- not only Christianity and Islam, but also Buddhism, Hinduism, Confucianism, Daoism, and Judaism -- in its totality over time. As she describes, each arose in an agrarian society with powerful landowners brutalizing peasants while also warring among themselves over land, then the only real source of wealth. In this world, religion was not the discrete and personal matter it would become for us, but rather something that permeated all aspects of society. And so it was that agrarian aggression, and the warrior ethos it begot, became bound up with observances of the sacred.

In each tradition, however, a counterbalance to the warrior code also developed. Around sages, prophets, and mystics there grew up communities protesting the injustice and bloodshed endemic to agrarian society, the violence to which religion had become heir. And so by the time the great confessional faiths came of age, all understood themselves as ultimately devoted to peace, equality, and reconciliation, whatever the  acts of violence perpetrated in their name.

Industrialization and modernity have ushered in an epoch of spectacular and unexampled violence, although, as Armstrong explains, relatively little of it can be ascribed directly to religion. Nevertheless, she shows us how, and in what measure, religions, in their relative maturity, came to absorb modern belligerence -- and what hope there might be for peace among believers of different creeds in our time.

At a moment of rising geopolitical chaos, the imperative of mutual understanding between nations and faith communities has never been more urgent, the dangers of action based on misunderstanding never greater. Informed by Armstrong's sweeping erudition and personal commitment to the promotion of compassion, Fields of Blood makes vividly clear that religion is not the problem.